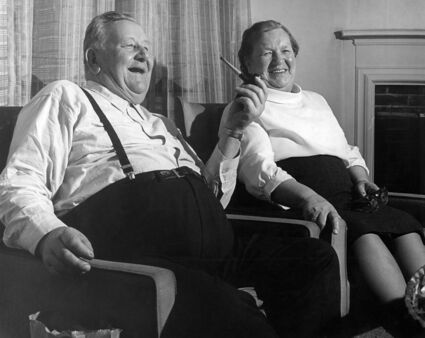 Community service was drilled into many of us growing up. This was necessary in rural communities of the past that had little money to spare. People gave time and energy to provide community centers, local celebrations, 4-H groups, local theater, food drives, cemetery care and more to enrich our rural lives.

As a volunteer myself - township officer, reporter, western Carlton County promoter, and donor - without any fanfare to many good projects, I see this tradition continue. Read the local papers and see all the activities individuals give their heart to.

We don't pat ourselves on the back enough. Each person can make a difference. I discovered a story about my grandfather that truly represents scores of people I have known who have made a mark.

Grandpa Matt Reed told me a story while sitting in the yard, watching me paint his house in the summer of 1971. He spoke of many things of his life, some of which he was proud of and some that he said showed human weakness. He spoke as a man sharing the journey of life with another man. Somehow, the whole conversation made me feel I had grown up and was respected.

Grandpa spoke of a time when he lobbied for the road to be upgraded from Automba west to the Aitkin County line. The trail was a shortcut along a freight trail but seldom could be used with car or truck because of its poor condition.

How did he finally manage to get the project approved? He said personal relationships with those in county government and state road commission members made the difference. He spent time getting to know them and like them. Then he started to ask for their help, and finally a meeting for community support was called for June 26, 1929, at the school in Automba.

He contacted everyone he knew of from the surrounding area: the Polish settlement to the south, the Kalevala area to the east, Lakeview Township and Wright to the north, and into Aitkin County toward Lawler and East Lake. A big meal was to be served by the local ladies.

About 500 people showed up in cars and buggies and he personally shook hands with everyone who came. C.A. Forbes from the Minnesota Highway Department, Carlton County auditor Oscar Samuelson, county commissioner Ludwig Olson and several elected officials arrived that day to inspect the road.

Grandpa said he had his Chevrolet single-axle truck with a flatbed and sideboards. The dignitaries climbed into the back and he took off heading west. The trail was so poor he had his accelerator to the floor board, bouncing from mud hole to mud hole. He looked in the side mirrors to make sure no one had bounced out. At the county line he turned around and hurried back.

As he pulled into the schoolyard he smiled to himself, thinking he had surely made the point that improvements needed to happen. He helped everyone off the back of the truck. After Forbes climbed down, he shook Grandpa's hand and reportedly said, "Mr. Reed, I think you need a road."

The county auditor Samuelson wrote later for the local papers:

"If there possibly had been uncertainty in the mind of Mr. Forbes about the prevailing sentiment in that district, that uncertainty could not exist after the meeting was over - and he said so himself."

Samuelson continued: "Seeing that so many had come to hear the verdict of Mr. Forbes, likened him to an old world nobleman, to whom his subjects had come to make known their grievances, and suggest that with the consent of the would-be nobleman and those present, Mr. Forbes be promoted, notwithstanding the citizenship laws of Uncle Sam, to the rank of a duke, and be known around Kettle River and Automba as the Duke of Automba."

Grandpa anticipated success and wanted to reward the highway commissioner for any future help. He bought a fancy Finnish hunting knife, engraved it for the "Duke of Automba," and presented it at the gathering as a presentation from all that had come to support the project.

The road from Kalevala Corners to the Aitkin County line became State Aid Road No. 12, the first of its type in Automba Township. State road money was now available to rebuild and upgrade the road.

Samuelson finished his news release with this paragraph: "Upon their departure, Mr. Forbes and (commissioner) Olson asserted that they will keep the new state aid road ... in proper repair in the future. They found a stretch of road east of the county line, in particular, in need of work." Grandpa Matt had made his point with the truck ride.

He smiled four decades later as he proudly told me of that shining moment. He said it showed how one man working hard can make a difference.

Dan Reed is a freelance writer and local historian who lives in Automba Township, where both sides of his family settled 130 years ago. He also covers Carlton County government for the Pine Knot News. Contact him c/o [email protected]