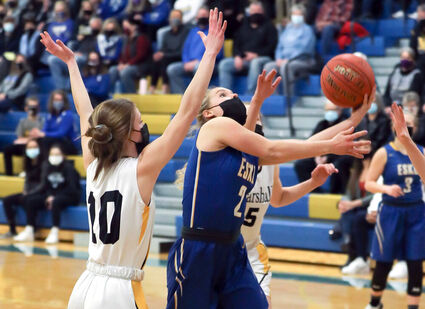 An impressive season came to an end for the top-seeded Esko girls basketball team on Friday in a loss to Duluth Marshall in the Section 7AA championship game. The Eskomos defeated Crosby-Ironton in overtime March 24 in the semifinal round.

The Eskomos fell 63-52 to the No. 2 seed Marshall. The Hilltoppers feature Division 1 recruit Gianna Kneepkens, who scored 31 points and controlled the flow of the game for her squad.

"We fell behind 10-1 and it just felt like we were on our heels from the start," said coach Scott Antonutti. "Despite that we had plenty of opportunities because they got in foul trouble, but we missed the front end of our foul shots and that was costly."

The first half saw the Hilltoppers hit nine 3-point shots as they built a 38-22 lead.

"They had 11 3-pointers in the game and nine of those came in the first half," Antonutti said. "They had only eight other field goals for the game, but they hit a ton of free throws and that was tough because we struggled at the line and we usually are a good free-throw shooting team."

Karppinen had another big night for Esko with 25 points to lead her team in the scoring column.

"I distinctly remember looking at the clock late in the game and at that point we were down by 15 points, 50-35," Antonutti said. "I told the girls I don't want any of you walking off the floor tonight knowing that we just let this game get away from us. I am so proud of how they responded."

In the end, the big lead was just too much to overcome as Kneepens and her teammates were able to withstand the Esko surge.

"I am proud of the season these kids had," Antonutti said. "We lost Sarah Wagemaker, who was our leading scorer and other girls stepped up. This is a gritty group without much size and they just fought and fought all year. I have a lot of respect for all of them."

Esko will lose Stark, Sunnarborg and Allison Thornton to graduation off a team that finished the season with a fine record of 16-4.

In their 63-60 overtime win over the Crosby-Ironton Rangers, the Eskomos were led by Jayden Karppinen, who lit up the scoring column by tossing in 34 points to lead all scorers.

"She did everything for us," Antonutti said. "She went 13-for-14 from the free throw line, she drove the lane for lay-ups and she hit 3's. She also added 11 rebounds. She is ultra-competitive."

Things didn't look good early in the overtime against the Rangers as the Eskomos fell behind by four points, but a key series of events turned the tables in Esko's favor.

"There was a flurry where they kept getting shots and then getting the rebound only to miss the shot," Antonutti said. "Eventually Aila Gabel got a steal and got the ball to Avery Kuklinski who got fouled and nailed two key free throws and that was huge for us." 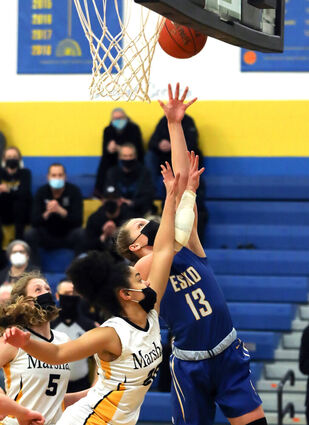 In an unusual set of circumstances, the Eskomos devised a game plan against seventh grade phenom Tori Oehrlein, who scored 26 points and seven rebounds in the regular season match-up between the two teams. That first match-up, which took place on March 1, saw the Rangers slip away with a 56-55 overtime win over the Eskomos.

"We put Mallory Sunnarborg on Oehrlein and Mallory did a great job of shutting her down," said Antonutti. "Mallory studies film, asks questions and takes pride in her defense and did a great job."

The Eskomos also slowed the Rangers down in the transition game, which paid off in overtime as the Eskomos notched the win.

Also scoring for Esko were Gaibel with 10 points, Brenna Stark with eight plus five each for Kuklinski and Sunnarborg and Kyra Johnson had a point.