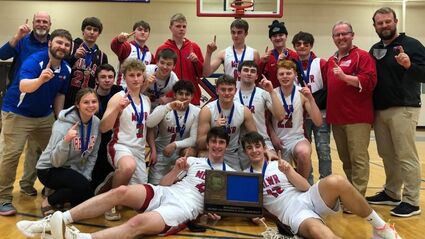 A switch in game plan and the perfect execution of that plan made the difference last Thursday night as Moose Lake/Willow River slipped by Pequot Lakes 57-53 to win the Section 7AA boys basketball title and a place in the state tournament.

The team got a tough draw in Wednesday's opening state quarterfinal and lost 71-40 to top-seeded Minneapolis North.

To reach state, the Rebels had to reimagine themselves against Pequot Lakes. "We played our normal up-tempo game last time we played them and lost in overtime," said Rebels coach Wes Cummins. "Obviously, that wasn't going to work this time. Pequot was the only team in the section that could run with us, so we didn't have any other choice."

The first time the two teams hooked up was a shootout the Patriots won 87-84 in overtime on Feb. 12. The normally high-flying Rebels had to devise a new game plan and executed it flawlessly to win the section title in Pequot Lakes.

"It was a combination of a good game plan and a little luck," said a modest Cummins after the game. "We knew that we had to slow the game down and limit their possessions, but more importantly, we had to make them play half-court offense. Last time we played, they scored over half their points in transition and from the free throw line. So we had to be content with only sending a couple guys to the glass and not contesting as many shots."

Another key to the win for the Rebels was containing the Patriots' best player, Bode Magnuson.

"He is one of the best players in the section," Cummins said. "Carter Johnson and Sam Dewey held him in check (7 points). The other player was their big guy, Sam Rysavy. We don't have the height to match up with him, so it took a group effort to hold him in check. Brady Watrin did a fantastic job all night on him."

The fired-up Rebels came out with a defensive tenacity that held the Patriots to just 18 points in the first half. Moose Lake/Willow River the 25-18 at the break.

"I told them that it was going to be a 36-minute game no matter what the score was at halftime," Cummins said. "Pequot is just too good to go gently into the night."

The Rebels didn't have any gimmicks defensively, and instead they were content to play with an aggressive, in-your-face, man-to-man defense that barely allowed the Patriots to breathe.

Suddenly, the Rebels, a team that is known for offense, was dominating defensively.

"For most of the year, we didn't play defense," coach Cummins said. "Over the last four weeks we really committed to playing better defense. We knew we could score enough to win a section, but we weren't playing good enough defense. The kids may have gotten a little sick of defensive drills then, but I think they all admit that it was worth it now."

On the other end of the floor, the Patriots switched up their game plan in an effort to slow down the equally strong Rebels offense.

"Pequot surprised us a bit and played a zone for most of the game," Cummins said. "With our ability to shoot the ball, most teams don't play it against us."

Mason Olson led the Rebels attack with a 19-point effort, Sam Dewey added 15 and Phil Sheetz was also in double-digit scoring with 11 points. Rounding out the scoring for the Rebels were Watrin with five, Logan Orvedahl four, Landin Kurhajetz two, and Carter Johnson with one point. 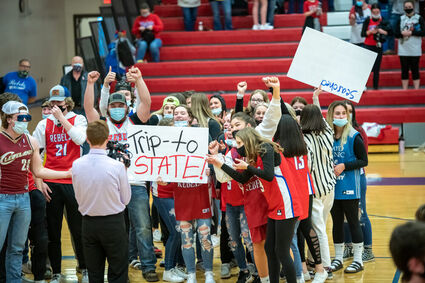 Rebels fans celebrate on the court in front of a television camera in Pequot Lakes afer the Rebels earned a trip to state with a 57-53 win. Photo courtesy of Shanna Watrin / Watrin 6 Photography

The win marks only the second time in school history that the Rebels have made it to the Minnesota State High School League State Boys Basketball Tournament. The first time they made the tournament was in 2005.

"The 2010 team made the section championship game, but the 2005 team was the only other team to make a state tournament," Cummins said.

"I feel confident that nobody in the section put in as much work as us. When I took over the program, these seniors and juniors were seventh-graders and sixth-graders," Cummins said. "These boys fully bought into what we were selling. And let me just say, what we were selling sounded crazy. Give me five days a week all summer long, an extra hour at the end of every practice to shoot, hours of film study, and if they did that, they would win a championship. These kids did everything I ever asked and more. I can't be happier for them."