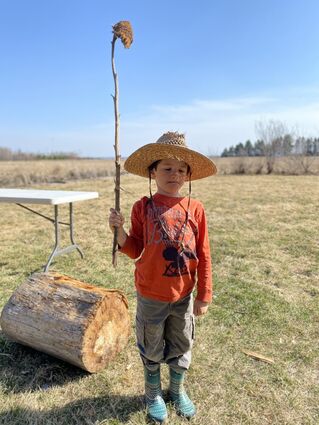 I don’t know if it was the warmest Easter on record, but it sure felt special to be outside without winter gear last weekend. We celebrated with family outside around the pizza oven and feasted on ham and pineapple toppings, with plenty of chocolate eggs for dessert.

We hiked back to our irrigation pond and heard a deafening number of chorus and wood frogs and saw two trumpeter swans swimming in the now open water. Janaki brought a pole along and we checked all the fields for frost. It might be the earliest broccoli planting yet this year.

As we relaxed with Grandma Jane’s cream puffs and coffee, my two boys rooted around in last year’s flower garden, pulling out old sunflower stalks that made it through the winter snow and spring winds.

I couldn’t help but think of one of my favorite poems by Allen Ginsberg. “Sunflower Sutra” was written in 1955 and its overarching theme is about resilience. It is a poem of crises and recovery and it seems as relevant now in 2021 as it must have felt during its beatnik birth.

The Latin genus name for sunflower is “helianthus,” which comes from two Greek words: “helios,” meaning “sun,” and “anthos,” meaning “flower.” It was domesticated in Mexico and the southern United States, and seeds have been discovered dating back to 2100 B.C. The plant was brought to Europe in the 16th century, and now Ukraine and Russia are the world’s largest producers.

Sunflowers are wonderful plants for beneficial insects, and they attract pollinators as well as predatory insects that can reduce pest population in other crops. When buying seeds, make sure to double check that the variety is not pollenless, as some seed companies sell these to flower growers who don’t want the yellow pollen to shed in arrangements. The pollen in the flower is what insects feed on and is important for the ecological system.

Ginsberg’s poem has its roots in another ode to the joyful plant by William Blake, entitled, “Ah! Sun-flower.” But while Blake’s poem focuses its imagery on the flower’s unique ability to track the sun and maximize its photosynthesis, Ginsberg looks to its incredible skeletal strength for inspiration. He uses it as a metaphor for the United States and suggests an America that has been battered by modern society but still stands upright. Instead of looking at the “dead gray shadow,” we’re encouraged to see the light and potential within.

As I re-read both of these musings on the natural world I think about our re-emergence as a society into the beginnings of a post-pandemic world. Things might still seem bleak, with case numbers rising, racial tensions raw, and political divisions remaining, but we continue to endure. We have the light of the sun inside us. How will we let it shine?

So I grabbed up the skeleton thick sunflower and stuck it at my side like a scepter,

and deliver my sermon to my soul, and Jack’s soul too, and anyone who’ll listen,

— We’re not our skin of grime, we’re not dread bleak dusty imageless locomotives, we’re golden sunflowers inside, blessed by our own seed & hairy naked accomplishment-bodies growing into mad black formal sunflowers in the sunset, spied on by our own eyes under the shadow of the mad locomotive riverbank sunset Frisco hilly tincan evening sitdown vision.