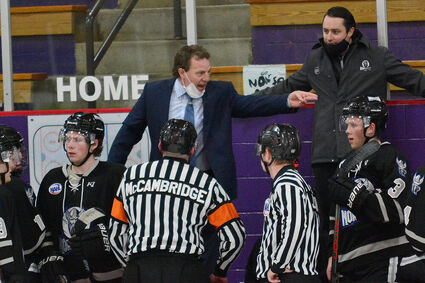 St. Cloud Norsemen coach and Cloquet native Cory Millen makes his case after a call in the March 31 game against the Minnesota Wilderness in Cloquet.

After a couple of coaching gigs and a trip back to school, former Minnesota Wilderness coach and Cloquet hockey star Cory Millen is back in the North American Hockey League as head coach of the St. Cloud Norsemen.

"The owner of the Norsemen reached out and asked if I had any interest in coaching again," said Millen. "We had met a few times just being in the same league in years past."

Millen accepted the invitation and is in the process of trying to build the Norsemen into a contender in the NAHL Central Division, much like he did in Cloquet when he led the Wilderness to the Robertson Cup in 2015.

The road back to the NAHL has been an interesting one for the two-time Olympian and 14-year NHL veteran.

"I went back to school to get my degree at the U and helped them out for a year," Millen said of his time with the University of Minnesota. "After that I spent a year at the Air Force Academy and was going to go back for another year, but Des Moines from the USHSL called and asked me to come and help out there," he said.

After a year in Des Moines, Millen decided to take a year off from coaching.

"That's when St. Cloud called me," Millen said. "It's been fun, but also a challenge."

That challenge started early, when the Norsemen struggled early in the season.

"We dug a big hole in the first third of the season," Millen said. "We revamped most of the team, but now we have lost a few very good players to injuries, so we still have more challenges."

On March 31, the Norsemen traveled to Cloquet, but fell to the Wilderness 5-0 as Millen returned to where his hockey career began on the outside rinks and then eventually the Barn at Pine Valley. 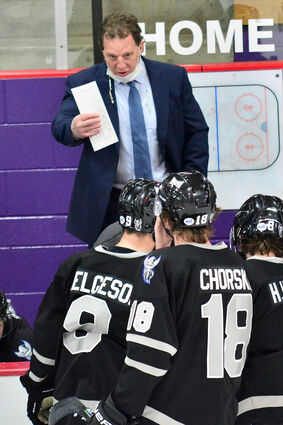 "It's my first year here in St. Cloud, but I am enjoying it," Millen said. "I enjoy coaching at the junior hockey level because I feel these kids want to learn and are very receptive."

Currently the Norsemen are in last place in the Central Division with 29 points over 30 games. Meanwhile, the Wilderness team is currently sitting in fourth place with 35 points.

"This year has been a challenge with the multiple stops and starts," Millen said. "The biggest adjustment for me has just been getting back and learning the player pool."

The job for Millen and his team doesn't get any easier, as they will host the top team in the NAHL, the Aberdeen Wings, on Friday in St. Cloud.