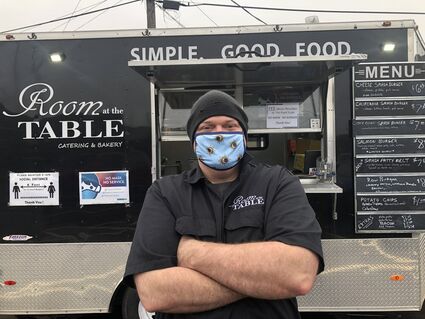 Paul Sapyta parks his Room at the Table food truck at the Cloquet VFW on Friday nights to serve "smashburgers" and other delicious food to go.

You're lucky if you find yourself at the VFW in the West End of Cloquet on a Friday night for a smashburger at the Room at the Table food truck. You'll have a great supper prepared by Paul Sapyta and his brother-in-law Kevin Peterson (his cooking and business partner), with a great local catering company and mobile restaurant.

Paul named the catering business Room at the Table Catering & Bakery after being inspired while listening to a sermon one Sunday. The minister was speaking of welcoming everyone, especially those living on the margins. He felt the phrase accurately expressed his belief that everyone deserves great food and warm hospitality. His menus always include delicious options for omnivores as well as vegetarians, vegans, gluten-free diners and anyone else with a dietary restriction.

From a very early age Sapyta loved to cook. He grew up in Chicago and as soon as he saw a real commercial kitchen, he was hooked. He taught himself by cooking his way through his mother's Better Homes and Gardens cookbook, frequently adding unusual ingredients to her grocery lists.

He shelved his love for cooking, studying cultural anthropology in college and then going into the Army. He met his wife Sarah, a Cloquet native, at the Department of Defense Language Institute, where they both became fluent Russian speakers.

Sarah served in Iraq. Paul served in Afghanistan. He worked in civil affairs on civilian-military partnerships in beekeeping, seedbanking, poultry production and road building. His work was aimed at stabilizing the region, which he says was satisfying. But there wasn't much opportunity to cook.

Paul and Sarah moved to Cloquet after their military service, and their daughter Emily is a student at Cloquet High School. Paul began volunteering to cook congregation and community meals at the First United Methodist Church (Coppertop) in Duluth, where Sarah's family has been active for a long time.

Pretty soon church members began asking him to cater parties. Sapyta approached the Cloquet VFW to serve as his commissary kitchen and things really took off. He credits Sarah for the quality of his cooking, saying "she has high standards" and encouraged him to get better and better.

Paul is now the VFW's quartermaster. The club is also homebase for the local chapters of the Disabled American Veterans, the Eagles Club and the American Legion. He's planning to bring the food truck to Carlton Daze at the Carlton VFW the last weekend in July.

Sapyta says his work in Afghanistan showed him how to spot promising community development opportunities. He's excited about West End Flourish, the new project that engages artists and creatives in revitalizing the historic West End of Cloquet. He says the project will "start the snowball rolling down the hill."

"The West End was a great part of town before, and it can be again," he said.

Sapyta moved to the kitchen at the Cloquet Forestry Center after meeting Jim Vnuk at the Fond du Lac Tribal and Community College Food for Thought event in January 2020. Jim n Jo's Katering has been at the location for many years, and Room at the Table is grateful for their partnership. "Jim has such great ideas and incredible expertise and connection," Paul said.

Vnuk is organizing free takeaway community meals for Thursday afternoons in May and June. He's working with Carlton County United Way, Carlton County Lions Club, Loaves and Fishes in Minneapolis and, of course, Paul. People can pick up free meals at the Cloquet and Carlton VFWs and at Paul's trailer outside the Head Start gym on the Fond du Lac Reservation. Details will be available at the United Way and City of Cloquet Facebook sites soon.

Vnuk gets the last word about his friend and catering colleague.

"Paul is all about giving back by taking care of guests with great food and hospitality," he said, adding that he appreciates Paul's "adventurous spirit and inclusive approach to food, plus his dishes taste really good."

Give Paul's recipe on this page a try and make your way to Room at the Table some Friday night soon. See you there.

Our region is flush with great food. From the Fond du Lac Band's Indigenous foragers and gardeners, to the Mahtowa pig farmers and beekeepers, the Wrenshall and Blackhoof sustainable farmers, the Carlton shiitake mushroom growers, the Esko picklers, the Moose Lake brewers, and the Cromwell orchardists - the 'grow, shop and eat local region' is prospering here. Meet our food lovers and cooks and enjoy the favorite dishes they actually cook and eat at home. If you would like to tell your local food story, call Emily at Oldenburg House at 218-384-4835.

My husband and favorite jazz drummer, Glenn, is a big fan of Room at the Table's butternut squash noodle stir-fry. It's often on the menu at the Cookin' at the O jazz dinners held at Oldenburg House. The dish goes really well with roasted pork, chicken or tofu. I love this dish because it hits all the requirements for serving to a larger group. It's gluten-free, vegan, and vegetable-forward while being so delicious that meat eaters and picky eaters don't even miss the absence of meat. Use it as a main course and top with grilled chicken, steak, shrimp or tofu. The options are endless in terms of the vegetables used. Use a combination of raw and cooked vegetables to keep it fresh and interesting. 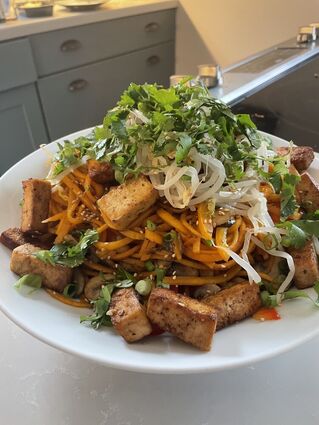 • Heat 1 tablespoon vegetable or canola oil in wok or skillet

• Add mushrooms, season with salt and pepper. After 2-3 minutes stir mushrooms. Cook for another 2-3 minutes. Add garlic and ginger, stirring until fragrant.

• Add sesame oil, mirin, and tamari. Continue to toss until noodles are soft (3-5 minutes). Test for seasoning, add salt, pepper, soy and mirin to taste (use caution with mirin, it is very sweet, but add more mirin before adding more salt or soy).

• Top with bean sprouts, cilantro and a sprinkle of sesame seeds.