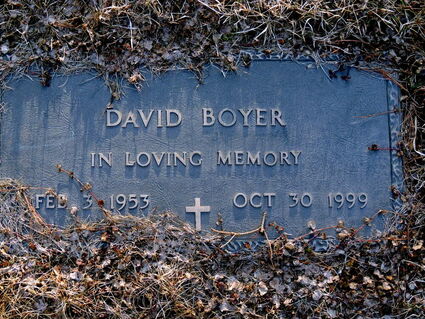 Seeing how people are struggling and yet winning battles with Covid-19 reminds me of my friend Dave Boyer - a man with great inner strength and character - and so does my wedding anniversary this month, as Boyer was my best man. One of his goals was to live to 2000 and celebrate the new century. He died in 1999 at age 46 from complications of kidney disease.

Growing up, Boyer was one of the best athletes in Cloquet in his age group. I recall seeing his many Punt, Pass, and Kick trophies, basketball ribbons and awards, and even some track and field recognition. Later he played competitive golf. He was an all-around gifted athlete.

In his sophomore year at Cloquet High School, Boyer was playing and even started some games for coach Rol Bromberg's football team ... at quarterback. Students that young didn't get playing time very often with Rol's teams. But Boyer was a fairly big 10th-grader at 6-foot-2, and he was blessed with a rifle arm. He also had a tremendous overall knowledge of the game and a sense for successful play-calling. That winter, he also was the sixth man on the star Mickey-Hunter-led varsity basketball team. Dave was playing, as rules allowed, two quarters for the JV team too.

After a particular Lumberjacks basketball game, however, Dave's ankles hurt. Coaches asked him if he had sprained them. The answer was "no," even though they were visibly swollen. Boyer was taken to hospitals in Cloquet and Duluth, and eventually to the Mayo Clinic.

Between dialysis, being sick, having his kidneys eventually removed, losing his hair, doctor visits and big fluctuations in his weight, he missed most of his junior year of high school. Cal Langevin and I visited Dave at the Mayo in Rochester - I remember wondering if he was going to live or die. Frankly, I hardly recognized him when he came back to school in the fall of his senior year. He had markedly changed. Then, surprisingly, he told me he was going to try out for the football team. He made it as the third string quarterback. I didn't think he would or could play.

As fate would have it, the first and second string quarterbacks were injured. Dave was called on to play. We were cheering for him from the sidelines, but I remember on his first snap from scrimmage he got creamed. I never thought he would get up. But he wobbled to the huddle and finished the game.

Bromberg was a good coach and he knew Boyer could still throw. Bromberg ran plays that put Boyer in the shotgun formation, starting him several yards behind the center. I'd never seen this setup in a high school game. Since Dave really didn't have to move much, just hand the football off or pass it, he performed great. He played on the basketball team his senior year too, but not like he had in the past. His stamina and jumping were limited, but considering where he had been healthwise a year before, observers admired him.

Boyer planned to attend the University of Minnesota Duluth, but had more health setbacks. Doctors removed what they thought was his diseased kidney and tried a donated kidney transplant. As I recollect, it functioned admirably for a couple months and then began to fail. His rare kidney disease was intent on rejecting the new kidney. His survival was dependent on dialysis machines.

Boyer basically missed that first year of college, so we enrolled in a lot of the same courses the following year. His brother taught labor relations and we registered for his class, along with other business courses. He struggled with attendance sometimes, but Dave weathered the health setbacks and got by.

The winter of our sophomore year, Dave found me in the Kirby Student Center and said "I signed up, too!" UMD intramurals sponsored an annual basketball free throw contest open to all students. He hadn't - due to health reasons - picked up a basketball in over a year.

"Let's go to the gym, I need to practice," he said. We went immediately. Now, the free throw line is 15 feet from the basket rim. We were in our street clothes, but he got to the line and took a shot. Not surprisingly, it went about 10 feet. Boyer had lost a lot of muscle and strength. But he kept practicing and improved appreciably.

On the night of the event in the UMD gymnasium, we heard the rules of the competition. It was going to be tough. Participants would shoot only two free throws at a basket and then move to another basket - 50 total shots at five different baskets. The winning shooter would receive a coveted gold UMD Intramural Champion T-shirt. Had there been an eBay in the 1970s, the shirts would have drawn top dollar.

In what was a tremendous effort, Boyer made 45 out of 50 and won. He beat Terry Egerdahl by one (see my Egerdahl story in the Jan. 22 Pine Knot), among all the other entrants. He was smiling from ear to ear, it was so fun to witness.

It took a couple of extra semesters, but Dave received his business and economics degree from UMD. He had a career as an accountant, married and had a family and dog. He was a member of the Cloquet school board and also golfed, but going through dialysis three times a week at five hours a session limited his plans somewhat.

Doctors tried one more transplant with Dave, but it failed as well. With all this life trauma, he still managed to stay very positive. He had tremendous faith and never felt he was dealt a bad hand.

Dave Boyer kept trying to the very end. I'll be thinking of him on my anniversary.

Steve Korby's interest in writing goes back to when he was in fourth grade and editor of the Scan-Satellite school newspaper in Scanlon. Steve loves sports, especially golf. He welcomes human interest stories and tales regarding Carlton County residents, projects, history, and plans. Write to him via the Pine Knot News at [email protected]