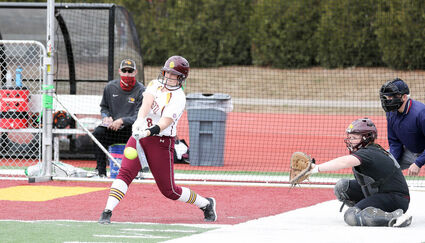 Four former Cloquet-Esko athletes are making their mark on the Bulldog baseball and softball rosters this spring. Tim Pokornowski and Kiana Bender from Cloquet and Esko's Dea DeLeon and Tyler Peterson all made the jump from high school to Division II athletics at the University of Minnesota Duluth over the past few years.

Pokornowski, a 2018 high school graduate, is not only playing on the Bulldogs baseball team, he also plays on the football team.

"Playing two sports in college is a gift," said Pokornowski. "I really enjoy the aspect that whenever I'm playing I'm competing. There really is no off season for me."

In his senior year in high school, Pokornowski quarterbacked the Lumberjacks to a runner-up finish in the state high school football tournament. This spring at UMD, he has been a bright light in an otherwise tough year for the Bulldogs, who are just 6-16 record-wise. At the plate, Pokornowski is No. 3 on the team with a .360 batting average, first on the team in slugging percentage, No. 2 on the team in number of hits and third on the team in runs scored and RBIs.

"I started off the season batting in the Number 9 hole and I went on a 10-game hitting streak and got bumped up to the No. 3 spot," Pokornowski said. "I've been struggling a bit adjusting to the pressure, but I am still doing well."

Peterson graduated in 2018 from Esko and started 11 games in 2019 as a freshman. This season - working through some minor injuries - the 5-foot-6-inch 200-pound catcher has started in 12 games behind the plate and has a .216 batting average. Peterson has eight hits including two doubles. Defensively the former Eskomo has thrown out four attempted base stealers.

"College ball is extremely tougher than high school ball," Peterson said. "Expectations with performance, in the classroom, and on the field, is a must and is expected to be sustained. My teammates and I work through the challenges together. Ultimately, at the end of the day I have 35 teammates that will be friends for life."

While the baseball team has struggled, the UMD softball team has been impressive. The Bulldogs women's team has racked up a 20-6 record overall and a 10-2 conference record. Both Bender and DeLeon are freshmen on the team.

"The adjustments have been OK from high school to college for me," said Bender, whose brother plays on the Bulldogs hockey team. "Having last year off was a struggle because not having the games and not playing my senior year was heartbreaking."

Perhaps especially heartbreaking for Bender was that in 2019 the Lumberjacks high school softball team finished third in the Class AAA state softball tournament and was loaded with returning talent in 2020. Many in the state had picked the 'Jacks as the odds-on favorite to win the state tournament in 2020, but instead Covid hit and the season was canceled.

"Even though we didn't get to play high school ball, I did get to play summer ball last summer and didn't have to go into college without having played for a year," said Bender.

DeLeon has not seen as much playing time as Bender, who is a starter in centerfield and left field for the Bulldogs, but the former Esko star is seeing more time as the season wears on.

"For me the transition is a lot different, because everything is fast-paced and full of learning new drills and skills," DeLeon said. "Practices are longer and we have to lift weights three times a week."

For both DeLeon and Bender, the pitching at the Division II level is perhaps more impressive than anything they've seen at the high school level. 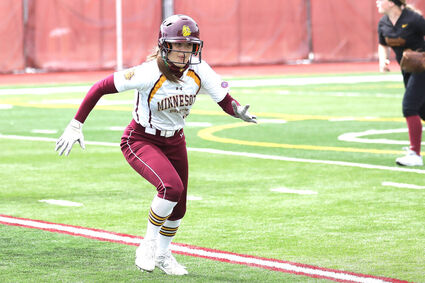 "Pitchers have more pitches and better control of them," said DeLeon. "There are also a lot more situations to learn and understand."

Despite not seeing as much playing time, DeLeon has embraced her role and has enjoyed her season thus far.

"My role right now is to play in defensive situations along with pinch running," said DeLeon. "I have learned so many new things about fielding at new positions and new hitting techniques."

All three of the athletes say that playing for the Bulldogs has been an amazing time for them.

"Our team is very close. I would say I think one of the best things is that when we came in as freshmen, the upperclassmen welcomed us with open arms," DeLeon said. "That is one of the reasons we have such good chemistry, relationships and success."