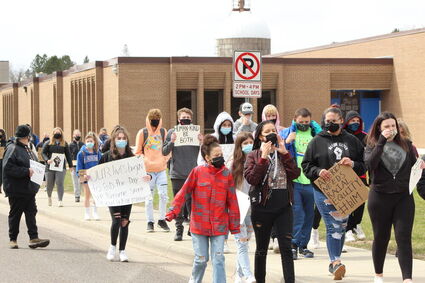 More than 30 Carlton High School students walked out of school Monday afternoon to march and kneel against racial injustice. Student organizers said they wanted to raise awareness that there is "stuff going on in the world."

The same day that a Minneapolis jury was hearing closing arguments in the case of a police officer accused of killing a Black man, nearly three dozen Carlton High School students walked out of school to stand in solidarity against racial injustice.

The students and some teachers marched from the front of the high school to the teachers' parking lot, chanting "No justice, no peace, prosecute the police," as they walked, led by speaker Jaylah Willis. She also led protests in Duluth last summer after George Floyd died as officer Derek Chauvin knelt on his neck.

Willis thanked the students for...