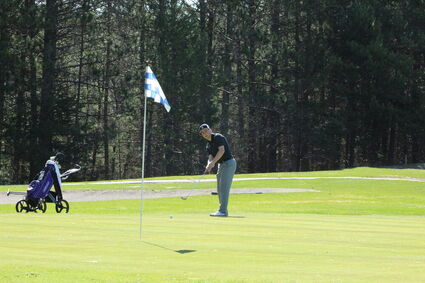 Cloquet senior Brayden Tyman puts on the No. 3 green at the Cloquet Country Club Friday. The Lumberjacks finished first in the meet, and Tyman placed fourth.

In advance of Friday's first home meet in chilly but sunny weather, Cloquet's top golfer, Sam Baker, was wearing a light jacket ... and an enormous pair of what looked like insulated oven mitts. Baker shed the mittens by the second hole, but the senior stayed hot on the golf course, taking the top spot for the second time in the first two meets of the season.

As a team, Cloquet dominated the meet on their home course at the Cloquet Country Club, taking first place with 311 strokes, followed by Hibbing with 371, Grand Rapids with 372 and Denfeld with 375. At Duluth's Enger Park golf course the week before, Cloquet's team won handily, winning by more than 50 strokes. Under cold sleety conditions, Cloquet defeated Duluth East, Duluth Denfeld, Grand Rapids and Hibbing.

Individually on Friday, Baker won with a 74 on the par-71 course. Sophomore Karson Patten tied for second place with Hibbing's Conner Willard, both shooting a 75. Cloquet seniors Brayden Tyman and Trevor Steinert took fourth and fifth, respectively, shooting an 80 and 82.

While, gratefully, there was no snow on the course - entirely possible in April - the conditions may have pushed the scores higher: Grand Rapids coach David Kuschel said some of the greens were like "playing Plinko" from "The Price is Right," as aerated holes from last fall's greens maintenance made the surface very uneven around some pin placements.

Not surprisingly, the Lumberjacks are the team to beat this year, again.

After taking third place at the Minnesota State Class AA golf tournament in 2019, the Lumberjacks boys golf team entered the 2021 season with four returning players who have played in two state tournaments already. They lost Anthony McKay to graduation. Various state coaches and other polls have Cloquet's team ranked anywhere from first to 11th in the entire state.

"With last year's season being canceled, a lot can change in the section, but we should be among the top teams," said head boys coach Aaron Young. "A golf team has six players, so we need two other players to step up each meet to join the four veterans."

Young has been working with many of the kids on the team for the past 10 years, when he started working with CCC pro Bill Manahan on the junior golf program there.

"Nearly all of the players on the golf team have been a part of the junior program and teen leagues we have run in the past," he said. "It has been nice to see the high school players come back and help out with the younger players in the past too. It's a great way for them to give back and I hope that will continue this summer also."

Young said he was lucky enough to have CCC golf professionals and Harry Newby Sr. (aka Grandpa Newby) willing to teach him and others.

The head coach also praised his older golfers for working with the younger players on the Lumberjacks team.

"With four returning players with state tournament experience, they are all aware of what needs to happen to be successful, and the younger eight players on the team need to be mentored to continue this tradition. Sam takes the lead on this." 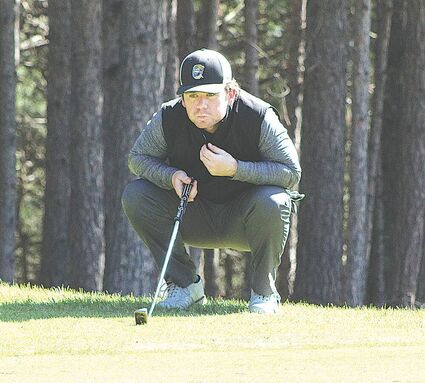 Baker is an elite player already, and Young said he and assistant coach Jim Stafford (who played college golf at St. Thomas) try to be there to support Baker both on and off the golf course.

Still, they are a team, and a good one at that.

"It is nice to know you are sending Sam out first each meet, but our team is lucky in that they have several experienced players teeing off after him," Young said. "So if one person is off that day there are other players that can step up and have a good day. That is a great advantage for our team to have."

The Lumberjacks were scheduled to travel to the Pokegama Course in Grand Rapids on Thursday, April 22, and have three meets next week. It becomes busy in an abbreviated season, with weather always being a factor.