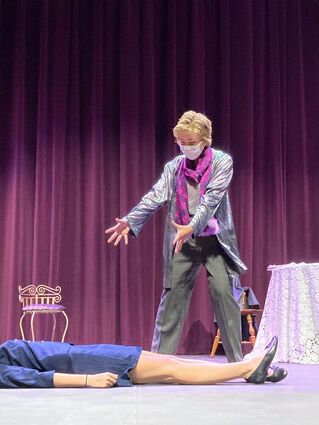 "Oh no, she's dead," Ellie Evenson dramatically proclaims after one of the actors (Addie Loeb) in the play she is directing (or playing a director?) staged a lengthy death scene.

After the fall musical was canceled because of the pandemic and the One Act play was entirely online - including rehearsals - director Darrell Davey was determined to make sure every student who wanted to be in the spring play could do so.

Of course, he also had to take Covid-19 into consideration.

After pondering, Davey and assistant director Iris Keller decided the best way would be to have two completely different casts for a one-act play. The casts did everything separately: rehearsals, costumes, etc. That way if one person got sick, both casts wouldn't have to quarantine. And by doing a one-act play that lasts only 35 minutes, both casts could perform on any given night.

"Cut!" by Ed Monk and Cloquet High School runs Friday and Saturday by invitation only. (It's not you, it's Covid.) Each actor is allowed to invite six guests to each performance.

After Cast A performs, the theater will be cleared and aired out before the next audience is allowed in. Of course, social distancing protocols and masks will be required for the audience. The student actors will also be wearing masks.

Davey said they had about two days between learning that they would actually be allowed to put on a play in person and calling for tryouts.

"We hit the ground running," he said. "We wanted to go with a comedy. With everything going on this year, we really wanted something lighthearted. 'Cut!' is about a bunch of actors and directors not really knowing whether they're in a play, or if they're really directing or if they're just acting within another one."

As the plot complications multiply, the actors begin to forget who is playing whom and who is the real director (versus an actor playing a director). Then things really start getting confusing ....

Last Saturday was the first time the two casts were able to watch each other rehearse.

"They got to see how different their interpretations were of the same play," Keller said.

"Even though they're delivering the same lines and we're giving them the same blocking, their mannerisms, their cadence and how they bring it across is so different and fun in its own unique way," he added. "We made sure there was no 'all star' cast - it's across the board. And over half our cast is freshmen ... seeing the talent we're going to have in the years to come is really reassuring."

Davey, a Cloquet High School alumnus, and Keller have known each other since he was in theater at CHS and she was assisting Julie McMurty.

Their relationship reflects that familiarity.

"He's always funny, you know," Keller said. "He talks a little bit too long sometimes and I gotta hit him in the back of the head. But no, he's really good with the kids and they do like him."

Keller may be the longest-lasting staff member of the Lumberjacks theater department, although it's a side gig: her full-time job is translating for deaf students at the school.

"I think this is my 25th production and I've worked with eight different directors," said Keller, a talented set designer and director of the previously mentioned one act play this winter.

Davey got involved with the theater program again several years ago, when Landon Hall was directing and the two of them happened to work at the same greenhouse. Hall died unexpectedly at age 23 while gardening. He had directed two musicals at CHS and worked under Kevin Hamre before that.

Landon asked if Darrell or his sister would like to assist him in that fall's musical.

"I was like, 'let me ask her' and that was a boldfaced lie," Davey said dramatically. "I waited two days. I never intended to ask her, because I absolutely wanted to do it. Besides, she was busy and getting married. I am beyond blessed to have had the time I did with him. I'm so grateful he got me to do this."

While Davey has great respect for both Hall and Hamre and their fabulous fall musical productions, he said he took the spring play in a different direction, approaching it more as a teaching opportunity. Students were encouraged to propose their own costumes and try out their own blocking. 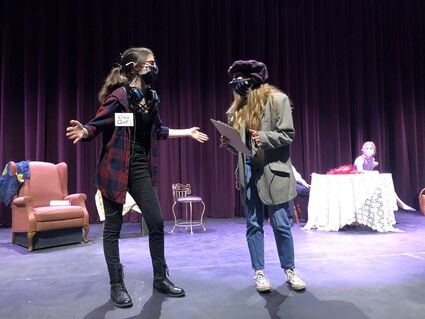 Crew chief Martha Stephenson asks Director 1 Olivia Macauley 'What do you want me to do about it?' when one of the actors simply won't say his lines the way she thinks he should. But that turns out to be the least of their problems in this crazy confusing comedy.

"I really wanted to take a step back from the grandeur that we were used to and say, 'Hey, we are still teaching these kids what the theater is like. So I think that's been really enriching for them, to see some of the background stuff. Then they can take ownership of the role so much more because they chose to walk a certain way or say a line a certain way."

Of course, there have been hiccups along the way. One of the casts had to quarantine for a while when one student got sick. A couple others dropped out.

By the end, there was some overlap between the two casts, with a few students playing the same role in both plays. "It was almost like everybody had an understudy," Davey said.

There has been no drama offstage this spring, Keller said. The kids all seem to appreciate the opportunity, especially after switching between in-person, distance and hybrid learning and having so many other activities canceled.

Theater at CHS is about togetherness, she said.

"This is the activity, one of the few where it's coed, all the grades, all the cliques, all the groups and they just become this unit," Keller said. "It's really special."