It's all about learning, says science fair mentor 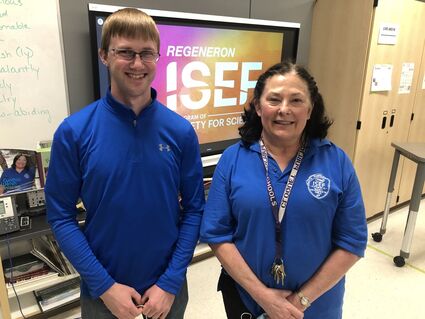 The kids aren't the only ones who were recognized at the 84th annual Minnesota State Science and Engineering Fair this spring.

Cloquet science teacher and science fair director Cynthia Welsh said she threw out the idea of nominating Bauer and it took off, with close to 10 nominations being sent in to Seagate. Teachers are nominated by students, parents, and school staff.

One of those students was quoted in the award announcement, remarking that Bauer "has a way of listening to students that shows compassion and patience and makes them excited about science. Instead of pushing them to a topic, Bill gives his 100 percent to hear about their interests, whether it be archery, video games, or basketball. He is one of the few adults in my life who were willing to truly listen about what I am interested in."

Award recipients receive a $1,000, a trophy and a Seagate hard drive.

According to Seagate, each teacher's school or science program also receives $1,000.

Bauer isn't a teacher though, he is a technology support specialist for the school district. But he is a born teacher, particularly in the area of technology.

After excelling in science fair for six years as a Cloquet student, Bauer almost seamlessly transitioned from student to mentor, even before he returned to work there, first as an AmeriCorps fellow about five years ago and then as an IT professional for the district.

Welsh was Bauer's mentor when he was in school, and she still runs the science fair program in Cloquet and the regional science fair. Bauer visited with the ISEF students when they traveled to California to compete and he was a student at Stanford University. When he was an AmeriCorps fellow, Bauer also used science fair to help further engage some of the students he worked with.

Science fair attracts a wide variety of students, and not just those at the top of the class.

"Some of the most enthusiastic students are those that you wouldn't expect necessarily," Bauer said. "Especially a lot of the middle schoolers are very enthusiastic and they start to dig in a little bit and they can get really excited about everything."

Bauer and Welsh make a good team. "We were a student-teacher team so we know we can work well together, and he has expertise that I don't have," she said. "I know environmental science and biology, but engineering and computers, that stuff is not my forte."

Anyone with programming questions she steers to Bauer. He also helps with a lot of the more-complicated projects that may need an element of programming to make them better.

Their characters also balance out. Bauer is calm and analytical when Welsh might get flustered by an important computer upload. But when Bauer might be tempted to go overboard on a certain aspect of a project, Welsh knows when to tell him to move on.

"He'll just want to keep fixing it and I'll be, 'nope, we're done. This is good enough,'" Welsh said.

When Welsh got cancer several years ago, she worked through her treatment, but Bauer was there to pick up the slack.

When Covid hit and science projects and meetings were suddenly all transferred online, the two of them figured it out together. This year they hosted the regional science fair entirely online - with judges visiting Zoom rooms to interview students, etc. - and things went pretty well.

Bauer said the award came as a complete surprise during this year's state science fair ceremony, which was held virtually, of course.

Bauer said he loves mentoring students in science fair - and plans to continue doing it.

"What I really like is constantly learning things. It's so fun for a kid to pick out a topic that they're interested in," Bauer said. "Then they say I really want to work with lasers or acoustics or make a video game and whether or not either of us knows anything about that, we go figure it out or find someone to teach us."

Bauer also said he enjoys seeing kids "out in the world" too, even more than seeing them win the top awards.

"When they're out in the exhibit hall, talking with judges who are experts in their field or people in industry who are interested in what the student researched, or as they get older to have some publish their research ... to contribute back to this body of knowledge, it gets me really excited too."