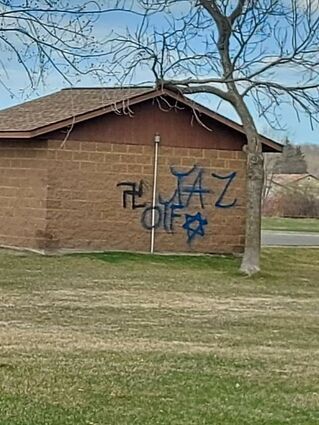 Last week vandals spraypainted the back of the porta-potty shelter with a swastika and a Star of David, in what appears to be an anti-Semitic message.

Vandals spraypainted a Nazi swastika and a Star of David - a widely recognized symbol of Judaism - on the back of the toilet shelter at Cloquet's Veterans Park last week. The symbols and the letters "olf" and maybe "jaz" or "taz" were quickly removed by city parks staff, who power-washed the building.

Cloquet parks maintenance worker Karin Stedman said they found more graffiti underneath the Highway 33 overpass, letters and numbers that may have been gang signs. There were also more swastika-like symbols. Those have been painted over, she said.

"It was a pretty tough week graffiti-wise," St...