As environmental economist, Cloquet grad worked with president and kings 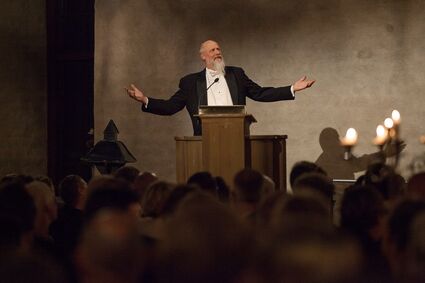 Jay Shogren in a tux receiving an honorary doctorate from the Swedish University of Agricultural Sciences in 2019.

McHale went on to be all Big Ten at the U of M, the third overall pick in the NBA draft, played on three world championship teams with the Boston Celtics and had his number retired by both the Celtics and the Gophers.

Whatever became of Jay Shogren? Well, he took a different but equally notable path. His resume includes being an internationally known environmental economist, winning the Nobel Peace Prize with a team of scientists and Al Gore, working for the king of Sweden and becoming a nationally known musician in his 50s.

It's been an interesting and unpredictable life so far.

The son of Trav and Lou Ann Prevost Shogren, Jay grew up on Geihan Way by Pinehurst Park on the west side of Cloquet. Trav was an insurance salesman, continuing his father's business. Jay Shogren was a good student and played all youth sports, but basketball was his favorite. "We had a good team my senior year at Cloquet," Shogren said. "Coached by first-year head coach Jerry Erickson, we won the conference and had a stunning come-from-behind victory over Cambridge in the Region semifinals.

Other starting seniors on that squad besides me were Pete Franz and Tracy Rodd. It's getting close to 50 years ago, but I still have a clear picture of that game and how McHale towered over all of us."

Curious about his high school interests, I asked Shogren about his favorite teachers and studies at CHS. It was an interesting mix. He first mentioned chemistry teacher Palmer Peterson, who called Jay and his buddies "a bunch of yahoos." Peterson gave him a "C" one quarter and he knew he had to bear down more. Next was English teacher Ed Zeman, who offered to teach Jay and some friends Latin on his lunch breaks. He's not sure why they wanted to learn Latin. Third was another English teacher, Bill Obst. Jay said he provided a wide panorama of life experiences and philosophy.

Shogren attended the University of Minnesota Duluth after graduating from Cloquet, pursuing a degree in accounting and economics. He played basketball on the UMD JV team his freshman year but elected to play just intramurals the next year. His team won the state intramural championship and played at Williams Arena.

Jay said he took a keener interest in his studies and music skills development and playing the guitar.

His mom and dad moved from Cloquet to Las Vegas during his sophomore year. In the summers, Shogren ran a golf course driving range on land Harry Newby owned, where the Cloquet Walmart is now located.

In 1980, when Jay graduated from UMD, Duluth was seeing an economic downturn and a plummeting population. There weren't many local career opportunities for economics majors. Always a lover of the outdoors, his first job was as a fur trapper in Saginaw north of Cloquet. He later moved to Minneapolis, where he worked as a janitor, garbage collector, landscaper and sound stage assistant. He also won a Minneapolis music writing contest. Seeking ties to his heritage, he took an evening course in the Swedish language at the University of Minnesota. His classmates were a bunch of Finnish immigrants. In later years, he was told his Swedish had a Finnish "brogue."

This is when his life took a big turn.

He applied for an assistant professorship in the economics department at the University of Wyoming in Laramie, an opportunity that would lead to the doctorate program. UW was accredited as being a world leader in the merging of the environment and economics. He became immersed in the program and received his doctorate in one year.

"I must have been the only one that applied and showed up," the humble Shogren told me about being hired for the position.

After a few years, he had an opportunity to study more environmental economics in Stockholm, Sweden. His great-grandparents were from Sweden, spelled with an umlaut over the "o" in Shogren. He lived, for one year, in a small cabin on a lake away from the city. Shogren said it was enlightening and, since he was blond and tall, he "didn't stand out so much in the crowd."

The next 10 years of Jay's life and career were a whirlwind.

He left Wyoming to teach at Appalachian State University in North Carolina, "a beautiful place," per Jay. He then spent time at Iowa State University listening and talking to farmers about the economics and risk of maximum field production while weighing the long-term effects of herbicides and pesticides. Next, it was Yale University in New Haven, Connecticut. "Too many people!" was his comment. Shogren was being recognized as a national leader in the study of environmental economics and balancing saving endangered species and other environmental concerns while coexisting with energy and related developments.

Next he spent a year in Washington, D.C. as a member of the president's economic advisory committee during the Clinton-Gore Administration.

I asked him how a person gets picked for such a prestigious role and he said, "Oh, you just have to get around a little and be talking to the right people."

Shogren returned to teach in Wyoming, but his presence was soon requested by the King of Sweden - Carl XVI Gustaf - for a one-year assignment to be the king's handpicked economist and advisor. Such an honor for the Cloquet alumni. His parents were able to come and visit him in Sweden. It's also where he met his future bride, a fellow economics teacher/professional.

"I'm glad I spoke Swedish," Shogren said. "It's how I proposed."

Shogren came back to Wyoming with his bride to resume his professorship in Laramie at the University of Wyoming. Before long it was globally announced that a "team" - which included Shogren among 2,000 scientists and researchers along with Vice President Al Gore - had been awarded the Nobel Peace Prize. The 2007 award recognized the work of the Intergovernmental Panel on Climate Change to establish a connection between human activity and global warming. "I just wrote a couple of chapters in the study," Shogren said.

In our discussion, I noticed several times he never pushed to blow his own horn ... even if he should have been like Gabriel. What an accomplishment from a graduate of Palmer Peterson's CHS chemistry class!

The story doesn't end here. Around the same time, Jay got involved in the production of a local show for his daughter, and spent time in the event's music development and performance. He had put this part of his life on hold and realized how much he had missed it. Shogren began writing, playing, and singing a lot of his own songs. His music career had begun way back when he was playing guitar in basements in Cloquet as a high school student.

His music became popular in Wyoming, regionally and even nationally. His band - Jay and the Shanghai'd - has opened the Snowy Range Music Festival and performed at the Lincoln Center in New York City and the Kennedy Center in Washington, D.C. They won the Wyoming Blues Challenge a few years back and represented the state in the International Blues Challenge in Memphis. This is only a small sample of their accomplishments. 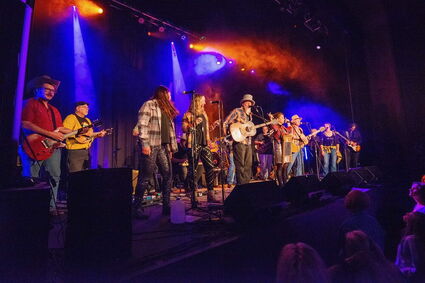 Shogren describes his band, J Shogren Shanghai'd, as "hard acoustic music from lives lived in loud proportions" and pulp Americana at jshogren.org. He even has a song titled "Jessica Lange" on his "Pulp for Paper" album. Look it up on Spotify.

I happened to hear Jay play a few years ago at the Streetcar Kitchen & Pub in Carlton. Kraig Erickson - another CHS alumni and former St. Scholastica basketball star - had given me a heads-up that Jay was going to be in town. Shogren played his guitar with another famous Cloquet musician: Dedric Clark (currently of the Social Animals). It was a very entertaining and special evening. Jay sent me a link to one of his songs, "Jessica Lange," from his 2020 album "Pulp for Paper" on Spotify. Check it out. It has some fun Cloquet ingredients.

Shogren is still teaching at the University of Wyoming, all while keeping the music playing.

His expertise has led to a dozen books, some 80 book chapters, and more than 200 journal publications.

He's world-renowned, but I've run out of space to list all of his accomplishments.

If there ever is a ticker-tape parade on Cloquet Avenue recognizing famous Cloquet alumni, athletes, and personalities from the region, Jay should definitely have his own float, maybe even as the grand marshal.

Writer Steve Korby’s interest in writing goes back to when he was in fourth grade and editor of the Scan-Satellite school newspaper in Scanlon. Steve loves sports, especially golf. He welcomes human interest stories and tales regarding Carlton County residents, projects, history, and plans.