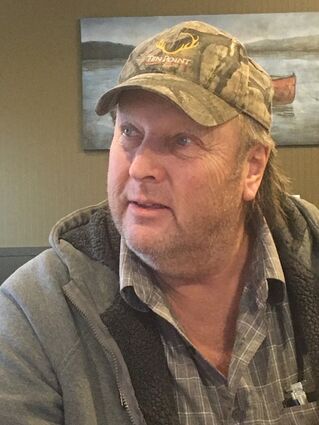 Kevin Jeffrey MacDonald, 65, of Nickerson died of natural causes April 21, 2021 at his home. He was preceded in death by his parents, Orien and Mildred MacDonald. Kevin was born July 24, 1955 in Cloquet. He was the fifth of eight children in the family. He graduated from Wrenshall High School in 1974.

Kevin was a union-based licensed welder, and was respected for his skill and creativity. Through the years, he worked out of the union shop on jobs including working at the shipyards in Superior, Wisconsin, on the nuclear plant in Becker, and on the Alaska Railroad. He also worked as a welder for many years on the Burlington Northern Santa Fe (BNSF) Railway. Kevin was a true woodsman and was an avid deer hunter, trapper, fisherman and rock collector. He developed a keen eye for birding and always kept binoculars handy. He loved to hunt with his family, especially with the younger ones who would come along to learn the ropes. Kevin's favorite fishing streams were the Blackhoof and Little Net rivers. Kevin could make or fix anything, with a particular knack for mechanical equipment. His passion for big machinery, including caterpillars, dump trucks and bulldozers, came into play as he continually enhanced his beloved property in "downtown" Nickerson, as he called it, which was originally his Stover grandparents' land. And maybe sometimes, he just liked to dig in the dirt.

He was also THE best blueberry patch scout as a boy when his mother and siblings were out picking every summer to raise money to buy school clothes. He would go ahead of the pack to find the best picking spots, while keeping everyone safe from the bears ... or likely he also really just wanted to explore the woods and swamps.

Kevin loved to search out nature objects while out in the woods, and would skillfully develop them into artistic displays. He especially loved to find interesting pieces of driftwood and tree burls that could be crafted into something special. He also was a longtime Minnesota Vikings fan, and enjoyed watching state high school basketball championship games, always cheering for the rural Minnesota teams.

Kevin lived life on his own terms, and was comfortable in his own skin. He was a natural optimist. He had a great sense of humor, with a sometimes-

evident temper. He loved a good debate and often would push issues just to "get a rise out of you." He had a nice tenor singing voice and loved music, especially rock. He had piercing blue eyes. He was a good cook, and was the often-mentioned (by him) winner of the family chili contest. He was a strong protector of family and friends.

He is survived by his loving siblings, Susan (Lee) Wehrenberg of Lindstrom, Stephen (Nena) MacDonald of Gila, Gregory MacDonald of Holyoke, Patricia (Jack) Almos of North Branch, Cynthia (Larry Grewach) MacDonald of Burnsville, Kathleen (Dan) Harman of Pequot Lakes, and Michael (Kathi) MacDonald of Snohomish, Washington; 13 beloved nieces and nephews and 14 great-nieces and great - nephews; many cousins; and many good friends. One of his endearments was to give a funny nickname to each kid in the family to make them feel special around their Uncle Kevin.

Kevin had the warmest heart of us all, and always allowed himself to dream. He will be so deeply missed by those he held close.

Graveside funeral services will be held 11 a.m. Sunday, May 16 (the day after the Minnesota fishing opener!) at the Nickerson Cemetery (corner of DeLong and Cemetery Roads). Lunch will follow at the Nickerson Town Hall (East Main Street just off State Highway 23), which was historically the Nickerson Presbyterian Church, where Kevin attended along with his parents and brothers and sisters, both sets of grandparents, aunts and uncles, as well as numerous members of the Nickerson community.

The funeral is an open event, and the family respectfully asks that attendees adhere to all Covid protocol, including mask-wearing and social distancing.