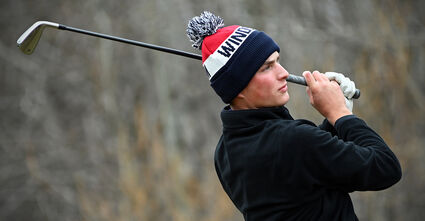 Could it happen again? Way back in 1962, Cloquet golfing legend Harry "Butch" Newby Jr. was the captain of the University of Minnesota Golden Gophers golf team. Could someone from Cloquet again be leading this Big 10 golf powerhouse? It's possible.

Cloquet Lumberjacks senior Sam Baker is in the process of rating, applying, finalizing and choosing where he plans to attend college in the fall of 2021. His golfing ability and potential are putting him in a very favorable position for his future education and development.

Baker's first priority for now, is his Lumberjacks golf team. Rated somewhere between first and 11th in state golf team rankings, it is a very formidable outfit.

"We're a close knit group," said Baker, "often giving each other 'knucks' and best wishes to all teammates prior to matches. Our goal is to go to the state tournament again."

They have had several meets this spring, all with team first-place finishes. Last year's high school golf season was canceled due to the Covid-19 pandemic. Although no guarantees, the entire team, says Baker, has been vaccinated, which new CDC rules have allowed. Safety of all is still the preeminent consideration for players. Quarantine for the team, although still possible, seems more unlikely. In addition to being vaccinated, the sport is played outdoors, has no physical contact, and can easily accommodate social distancing.

Baker has been on the Cloquet golf team since eighth grade. He started golfing with his grandpa, Jim Crowley, when he was 12, playing 18 holes summer mornings at the Black Bear course and then 36 holes that afternoon with his friends at the Cloquet Country Club. He's played a lot of golf in the past six years.

Baker's golfing prowess is not a secret. He established a new course record at the nearly 100-year-old Cloquet Country Club last summer, shooting a 62 on the par-71 course. He was the runner-up for the 2020 Minnesota Golf Association Junior Player of the Year. Baker won the 2020 Minnesota Junior PGA Championship at The Quarry at Giants Ridge. He came from seven strokes back after the first day to shoot a seven-under-par 65 the second day and win handily. He's played in the Minnesota State Open, a tournament reserved for Minnesota's finest and, usually, older golfers. And he was recently chosen as the KBJR TV Athlete of the Week. These are only some of his golf accolades.

Last summer, he recalled, he was in a tournament and had had some college discussions as allowed by NCAA guidelines. He didn't realize he was being followed, on his back nine holes, by a coach from Indiana University-Purdue University Indianapolis - a merger of Purdue and Indiana; the IUPUI Jaguars are a Division I college with about 30,000 students and have a golf program in the Horizon League.

He shot a 32! Baker said he had to confess to the coach that he scored a 40 on the front nine holes, but further conversations have led to IUPUI golf scholarship offers.

Academically, much of Baker's senior year has been through distance learning due to Covid. It so happens that his family is best friends with the Esse family in Lake Havasu City, Arizona. The Esses own golf courses, and Sam had visited there on spring breaks in the past. The Esses invited him to stay at their home for the winter. With the distance learning, Sam was able to meet his educational requirements, plus golf all winter long.

There was a downside: it meant giving up on his senior year of high school hockey. An excellent hockey defenseman, he loves hockey, so the decision was not easy.

To add to his golf "off" season, he had several lessons last winter from former PGA professional Bob May in nearby Las Vegas. May is best known for his three-hole sudden death playoff loss to Tiger Woods in the 2000 PGA Championship.

Between NCAA blackout periods suspending in-person recruiting, and pandemic relief in the form of an extra year of eligibility, it's just fairly recently that Baker has been speaking to the Minnesota Gophers golf team coaches about possibly attending the U of M. There is mutual interest.

What can he do in the meantime? He laughed, "Well, keep posting low scores!" He continues to also get instruction from the teaching pro at Interlachen Golf Club in Edina.

After the Lumberjacks high school golf season is completed, Baker has a very busy golf schedule planned for this summer. It includes, among other events, the Minnesota State Amateur golf tourney, the Cloquet Invitational at CCC (his first), the Minnesota State Junior Boys Championship and the MGA Players' Championship. He's a great golfer, with no weaknesses. Who knows, he could be donning the maroon and gold soon. We'll follow his progress and decisions.