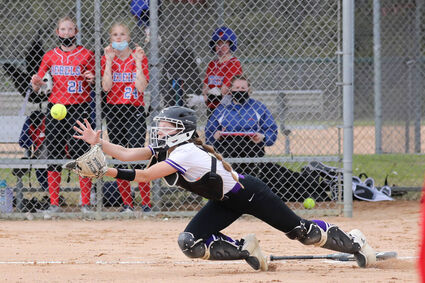 "They have a solid pitcher in Amanda Paul," said Rebels coach Kelly Goeb. "She throws strikes and has a good change-up, which kept our hitters off their game."

Paul went all seven innings on the mound for Cloquet and struck out 10 Rebel hitters, allowing just two hits and walking only one batter.

"Amanda is just a bull who doesn't back down and isn't afraid of a challenge," Cloquet coach Tyler Korby of his senior pitcher. "She's positive, fearless and a true leader for us in the circle."

The Lumberjacks were also solid behind Paul on the defensive side and didn't allow the Rebels a chance to jumpstart their offense.

"Cloquet's defense was solid and ours wasn't as strong," Goeb said. "If you look at earned runs, it would have been a 1-1 game, but we will learn from it and keep improving."

At the plate, the Lumberjacks got nice offensive production from Sophie Diver who had a 2-for-3 effort Friday.

"Entering Tuesday's game, Sophie led our team in batting average and on-base percentage," Korby said. "She's provided a solid presence for us in our middle-back half of our lineup."

Senior catcher Brenna McClarey had a double, Paul aided her own cause with a hit, Dana Jones added a run scored and an RBI and Araya Kiminski chipped in with an RBI.

Megan Hattenberger and Lily Kahara had the hits for the Rebels and the lone RBI for Moose Lake/Willow River was a product of a Hallie Klavu at-bat.

"Kelly has a scrappy bunch of kids down there in Moose Lake/Willow River," Korby said. "Sarah and Alexis can chuck it and they have some solid sticks. If I were in 7AA I would not take the Rebels lightly."

On Monday night the Lumberjacks downed Virginia 5-3 as Paul went five innings, gave up just three hits and no earned runs while striking out 11 Blue Devil hitters. Allie Jones picked up the save by pitching the final two innings.

Brenna McClarey went 1-for-2 including a two-run homerun. Again, Paul aided her own cause by going 1-for-3 with a double, Morgan VanReese had a hit and scored a run for the 'Jacks.

Also on Monday night the Rebels pounded the Eveleth-Gilbert Golden Bears 11-1 as Sarah Christy threw a 4-hitter in notching the victory on the mound. 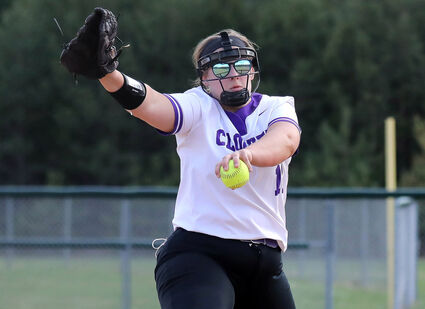 Cloquet's Amanda Paul throws a pitch during Thursday's softball game against the Rebels.

MLWR also had a nice day at the plate and were led by their pitcher Christy who had three hits, scored four runs and added three RBIs. Natalie Mikrot chipped in with a pair of hits, scored three runs and added a pair of doubles. Both Gabby Gamst and Janna Bode had a couple of hits and an RBI.

However, on Tuesday night the Lumberjacks lost for the first time since their opening game when they fell 3-2 in a pitchers' affair to the Superior Spartans.

"I love the resiliency of this team," Korby said. "No deficit fazes them. They just keep scrapping and battling. Superior is the best ball club I've seen in a long time and we were one hit away from beating them. We are finding ways to win and that's what I like about this group."

The loss puts the Lumberjacks record at 5-2.