Boys keep at it on club volleyball court 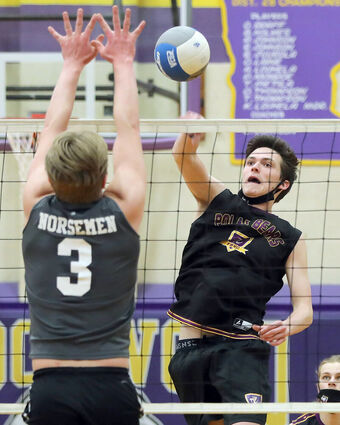 Cromwell's Nate Eliason makes a kill for Floodwood past the Proctor/Hermantown defense during boys volleyball conference play May 10 in Floodwood.

Two steps forward, one step back.

After bouncing back from a 2020 season nixed by the pandemic, the state's 5-year-old boys volleyball league faced another setback Tuesday when the 48-member legislative body of the Minnesota State High School League members did not approve a request to sanction the sport.

Cloquet coach Kelsey Motzko had been hoping it would pass this time. "I think it's been a long time coming," she said. "The interest is there."

While the majority of the representatives voted to approve boys volleyball as an MSHSL-sanctioned activity with 29 "yes" votes, 18 "no" and one abstention, it wasn't enough. The required threshold was 31 affirmative votes, or two-thirds, to pass.

The growth of the sport since two moms started the Minnesota Boys High School Volleyball Association in 2017 has been exponential, one of those moms, Jenny Kilkenny, told the MSHSL representatives in an online meeting Tuesday. That first year, 400 boys from 22 schools played on 38 teams. The second year that number doubled, to 800 boys. Before the season was canceled last year, they had 1,400 boys registered to play for 58 different schools, some of them with more than one team.

The Cloquet boys volleyball team had seen similar growth from its first season in 2019 when they had one team with 10 players, to the second year when 24 boys registered to play on two teams before the pandemic hit. This year they're back to one team and around a dozen players.

While many of the Cloquet players were aware of Tuesday's vote, it wasn't something that would have affected the majority of them, as 10 of the players will graduate this month.

Besides, they're just not that serious yet. Competitive, yes. Athletic, yes. Ready to practice for two hours five days a week? Probably not.

Junior Ryan Tomsche came out for the team the first time this year. He said he plays volleyball because "it's something different."

"It's new in the area as well, so that makes it even more fun," he said. "What I like about it is the thrill of trying to keep a ball up and how different it is from the other sports I play."

One of those sports is soccer. Don't be surprised to see Tomsche or some of his soccer-playing teammates occasionally kick the ball during a game, usually when they've failed to move fast enough to get it any other way. It's a move of last resort, legal, but the lack of control means coaches are less than impressed.

There are four boys volleyball teams in the Northland group - Cloquet, Proctor/Hermantown, Northeast Range and Floodwood (which includes three players from Cromwell) - and they play every Monday night. The teams are fairly evenly matched this year. Cloquet currently sports a 2:4 record, which is at least one more win than they had their first season, and they're getting better fast.

Coach Motzko was very happy with her team after their first two matches.

"I'm feeling really good," she said. "We've got some rust to kick off and some brand-new players who might not know all the rules, but we're working on it."

The games are exciting. What they lack in polish, the boys make up for in pure athleticism: diving, punching and slapping at the ball, racing across the floor to catch an errant ball, jumping up to block an opponent's spike, trying everything. A lightning fast kill is not unusual, especially with some of the basketball players, who seem to have springs in their legs. Blocks are often successful, but digging the ball seems to be the biggest challenge. 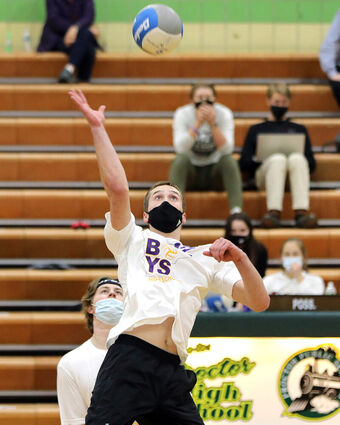 Of course, that might be because almost none of the boys wear knee pads. Which brings us back to the ball kicking. "It's not good practice," said Cloquet assistant coach Rick Rice. "They don't seem to have any pads on, so they like to kick the ball."

Senior Mason Avey said he has always enjoyed volleyball, but was never able to play competitively. The football and hockey player is in his second volleyball season now. "I love the fact that it's a group of guys who make playing the sport so much more fun than it already is," Avey said.

Motzko hopes they're building skills and a tradition of fun for future players, and the program will continue to grow, whether it's sanctioned or not.

"We're looking for players next year," she said. "We're gonna have a small set of returners with all our seniors, so if you want to come play, we'd love to have you."