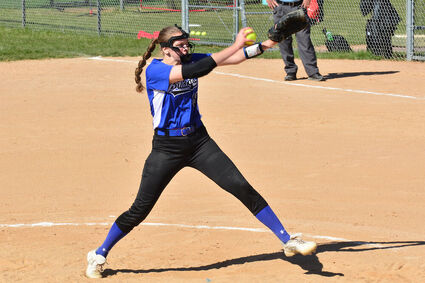 When Carlton's Abby Mitchell and Wrenshall's Brooke Kent took to the mound Tuesday night, not many people could have predicted the insane numbers the pair would put up in the strikeout department. The two combined for 35 strikeouts in a 6-1 Bulldog victory over the Wrens at Cloquet's Braun Park.

Mitchell picked up 20 of 21 possible outs via strikeout. As impressive as that was, the senior Kent was nearly as good by striking out 15 Bulldogs. In the end, the Wrens defense failed them in the final two innings.

"We were right there the whole game," said Wrenshall head coach Anna George. "They took a 1-0 lead in the first inning and then we tied it in the fourth, but we made some mistakes in the sixth and seventh."

Those mistakes allowed the Bulldogs to tack on two important runs in the sixth and three more in the seventh to salt the game away.

Carly Parker bashed a triple with one out in the first inning and then scored on a single by Eliza DeCaigney as the Bulldogs slipped out to a 1-0 lead. In the fourth, the Wrens scored when Kent scrambled to first after striking out and a dropped ball by the catcher. That was followed by a double by Hanna Pearthree, which tied the score at 1-1.

"I told the girls before the game it doesn't matter who we are playing, let's just play a good and solid game and give them a run for their money," George said.

Things got tough for Wrenshall in the sixth when DeCaigney singled, Mitchell walked and Maddie Asleson roped a double to score both runners and push the lead to 3-1. 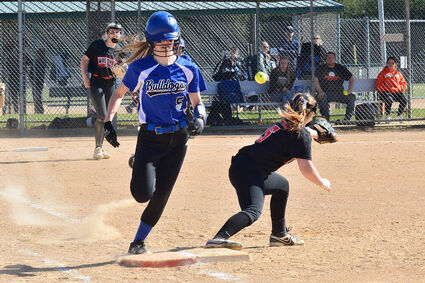 Carlton's Elizabeth Hey sprints to beat the ball to first base and Anne Mattson as the Bulldogs and the Wrens meet Tuesday afternoon at Braun Park.

"That was big for us," Pokornowski said. "We needed to find a way to break it open, and we did."

Carlton topped off the game with runs in the top of the seventh when Maelyn Pokornowski walked, Mitchell doubled, Asleson singled and Carley Lawry singled up the middle to score the final run of the game.

While both pitchers were beyond incredible, Mitchell's stats were downright gaudy as she fanned not only 20 batters, but threw just 89 total pitches - of which 74 were strikes.

"Those are impressive numbers, but it doesn't surprise me," said Pokornowski.

Kent and Mitchell are somewhat similar in pitching speed and style.

"What I found interesting is that both of them throw at about the same speed. Yet throughout most of the game, hitters who should be used to it struggled," George said.

The win improved the Bulldogs' record to 3-2, while the loss dropped the Wrens to 4-7.