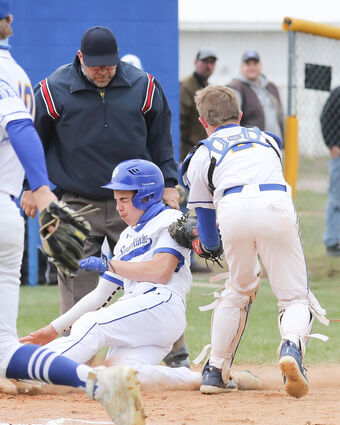 Esko catcher Ty Christensen tags out South Ridge's Tony Lisic at the plate during Thursday's Polar League baseball game. A strong start to the game by the Panthers allowed them to hang on for an 8-6 win.

"We knew going into the game that we had to get some runs on the board early," said first-year Panthers coach Aaron Weber. "We had a few big hits in the first inning and maybe caught them off guard a bit, which doesn't happen much to Esko."

Connor Bushbaum, Jackson O'Bey, Aaron Bennett, Carter Anderson and Austin Josephson all scored in the first inning to help kickstart the Panthers offense in the inning, but a series of misfortunes for the Eskomos also helped their cause.

"We had a ball that was hit too short that just didn't bounce like expected," said Esko coach Ben Haugen. "Walks, wild pitches and a balk ensued after that. We gave up five unearned runs and that is something we hadn't done much of all year up to that point."

The Eskomos bounced back with a pair of first-inning runs from Cale Haugen and Noah Furcht to cut the lead to 5-2 at the end of an inning of play. Haugen's run came when he hit a home run to right center field.

Esko added two runs in the third when Haugen and Furcht scored again and two more in the fourth when Cole Ondrus and Cal Berglund crossed the plate as the Eskomos went from being down 5-0 to leading 6-5.

"It was very important for us as a team," coach Haugen said of coming back to gain a lead. "I was proud of the way our guys fought and clawed back to take the lead. I think Cale's home run got us going, and hitting is contagious and we got on it for a while."

The Panthers responded themselves by riding the pitching of Aaron Bennett, Christian Pretasky and Jaxson Bennett, who held the Eskomos scoreless after the fourth inning. That allowed the Panthers offense a chance to come back.

"After the first inning, I told our guys that five runs was not enough to win the game," coach Weber said. "They are a solid team, but our guys fought hard at the end. We have a good group of resilient leaders that start with our two seniors, Connnor Bushbaum and Jackson O'Bey."

In the sixth inning, Aaron Bennett led off and was hit by a pitch. Next Carter Anderson reached on an error. Tyler Lisic and Josiah DeLoach connected on back-to-back hits to knock in Bennett and Anderson, giving the Panthers a 7-6 edge.

In the top of the seventh, Bushbaum singled and was sacrifice bunted to second by Wyatt Olson. Bushbaum then stole third base and came home on a single by Aaron Bennett to score the final run for the Panthers. 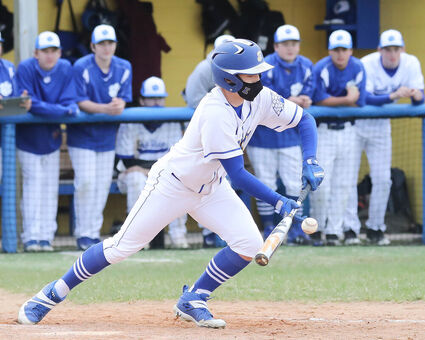 Esko's Avery Liljegren gets a bunt down against South Ridge.

The Eskomos had a chance to even the score with two outs in the bottom of the seventh, but the Panthers got a big moment on the mound from Jaxson Bennett.

"Jaxson came in in the bottom of the seventh and shut the door," Weber said. "He was hitting spots and mixing pitches well. He has been our go-to pitcher all year and he is a heck of a pitcher in big-game situations."

Bennett faced a bases-loaded situation and found a way to get two strikeouts to end the game.

"We had our chances and couldn't get the two-out hit," Haugen said. "In the seventh they brought in Jaxson Bennett and we struck out twice with bases loaded. We were exposed by South Ridge a bit as they put pressure on us with small ball, and we didn't execute. We'll get better from it."