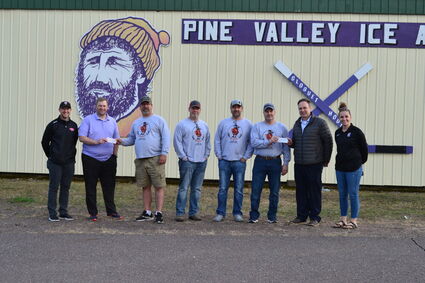 Hockey isn't just a young man's game - the 10 teams that turned out for the Rusty Axe men's hockey tournament earlier this year proved that.

Joe Broneak said he was thrilled with the number of players who signed up. They had teams from Carlton County, but also Duluth and the Iron Range. Most of the players were 21 or older.

"Six of us got together and planned it six weeks in advance and we got 10 teams. Next time we'll start earlier and hope for 16 teams," he said. Other organizers included Kent Johnson, Drew Rasmussen, Derek Fredrickson, Brent Stahl and Jeremy Opland.

Several area businesses donated items to the cause, including a chest freezer from Daugherty's, filled with meat from B&B, and lots more. They sold raffle tickets for the donated items, hoping to raise $500 and ended up raising more than $2,000, which they donated to local hockey programs.

"The whole tournament went really well and the teams all had a blast," Broneak said. "And we're already thinking about next year."