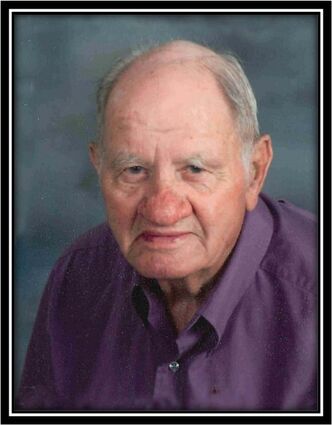 Edward "Ed" Donald Thornton, 95, passed away peacefully at Diamond Willow Assisted Living in Proctor on May 17, 2021. Ed was born in St. Paul, the second eldest of seven children to Ada and Edward L. Thornton.

Ed joined the U.S. Navy in 1943 when he was 17 and served in the South Pacific Theater as a signalman third class during World War II. He fought in the Battle of Okinawa among other actions. Ed served on the USS Briareus, USS Mona Island and the USS Chukawan, and was awarded the World War II Victory, American Campaign and Asiatic-Pacific Campaign medals and two service stars.

After returning from the war, he met Ardelle Paulson of Carlton. They were married in August 1948, and had four children. Ed worked at various jobs, including working as a radio operator and crane operator until he took a position with the Northwest Paper Company as a punch operator.

He then returned to school to become a pipefitter. He retired from Potlatch after 33 years.

During his time at Potlatch, he also ran a farm, raising turkeys and beef cattle for many years. Ed was often called the "Energizer Bunny." He was very active in the Nicholson-Sellgren VFW Post 2962, where he held multiple leadership roles including commander and treasurer, as well as serving with the Honor Guard. He was also an active member of Elim Lutheran Church.

After retiring, he filled his days with hobbies and travel. He always had a woodworking project underway and tinkered with any machine available. He golfed regularly with a league and with friends, even hitting a hole in one in his 90s. Ed was often the life of the party and made friends wherever he went.

Visitation: 2 p.m. until the 3 p.m. funeral service Monday, May 24 at Nelson Funeral Care in Cloquet. Military Honors will be presented by the Nicholson-Sellgren VFW Post 2962 Honor Guard, followed by a luncheon in the fellowship room. Interment services will be at the Sandy Lake Cemetery. Arrangements are with Nelson Funeral Care. See the online guestbook at http://www.nelsonfuneralcare.net.