Harry's gang: No masks is nice, but don't put them out of sight just yet 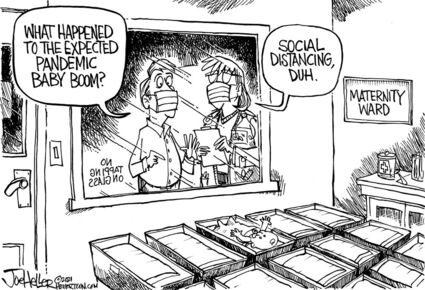 It was exciting to see so many people breathe a sigh of relief when Gov. Walz lifted the state's mask mandate last week. Not only was it easier to breathe that sigh of relief, we could actually see people doing it: no masks were covering their faces.

Of course, it's too early to declare victory over the coronavirus, and we can't get too careless now. The CDC has recommended only that people who are fully vaccinated do not need to wear a mask; those who are not vaccinated should still stay masked. But we know that many people resisted wearing masks at all, and now we'll never know if the maskless are immune, or stubborn. My guess is that many won't tell even if we ask.

I'm sure there was a lot of political pressure to announce the end of the mask mandate.

Very few were excited at being forced to wear masks in the first place, and as the pandemic raged and more people masked up, some became downright violent when forced to wear one. There's no denying that the virus affected business, and some people refused to wear the mask, or even admit the virus was dangerous in some sort of attempt to escape the reality that the virus was real and that we needed to take extreme precautions.

But some people are comfortable putting others in jeopardy, apparently, if it means their own financial interests don't get affected. It's like that scene from "Jaws," the 1970s horror movie about a shark with an appetite for humans trolling for bathers along an Atlantic Ocean tourist town: the city fathers are doing everything they can to convince themselves that the danger is passed. The mayor reopened the beaches, because he was pressured by the business people (who admittedly needed to make their profits during the busy summer season). Meanwhile, the shark continued eating well. The mayor was pressured into endangering the public to keep the economy from tanking.

I think the pressure was part of the CDC's thought process, which extended to our political leaders. It took a lot of courage for Gov. Walz to enact so many draconian measures in the first place to protect the health of the public, and he certainly withstood some pretty harsh criticism along the way. Still, both entities say they lifted the Covid restrictions based on the science, and based on his belief that people will do the right thing - stay masked until the threat of getting Covid is over.

So, the unvaccinated should stay masked. My fear is that too many of the unvaccinated are convinced the coronavirus is fake; they're the "government ain't gonna tell me what to do" crowd and may spread the disease to other unvaccinated people and maybe even those of us who have been vaccinated. I've had the rabies shot, but I'm not planning to roll around with rabid dogs any time soon.

As long as it took to make masking socially acceptable, it should take some time to get used to not wearing them. I hope people don't feel pressured to toss the masks if they are more comfortable with them on, and that those who need no masks continue to honor the businesses and entities that wish to require masks in their buildings. You can't be too safe, especially when we are still learning about this disease.

That's my big concern: if Walmart, Burger Shoes, or any other place decides it wants to require masks for a bit longer, they should be allowed to do that without being ridiculed or bullied. None of us are as smart and knowledgeable as the CDC on the spread of viruses, no matter how many TV programs you've seen or how much internet "research" you've done. Plenty of us are still tentative about the spread of this virus, and if someone asks you to put on a mask when inside, please do so. Save the histrionics for some other principle.

We finally got to the point where people were comfortable wearing masks in public, which is proven to reduce airborne respiratory viruses. It's too easy to relax. I hope that next flu season, many of us will remember how effective masks were in keeping the virus from spreading out of control, and decide wearing a mask might help slow the flu, too.