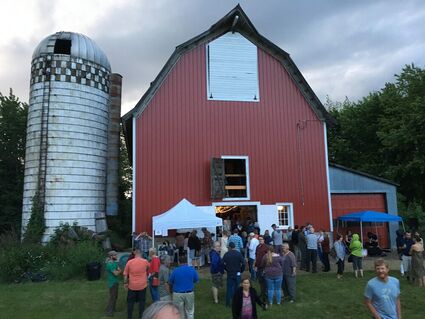 but there is one statue that I allow to keep a permanent perch: “The Jonake” by Edward Knudsen. The two-inch-high wire and clay figure depicts a farmer in overalls and plaid shirt holding a sign for the Free Range Film Festival. Underneath the inscription reads:

“Every year, in a big old barn, Jonake Fisher-Merritt holds a film festival. He shows dozens of

local independent films over a few days at the end of July. He sets up a film screen in the loft of

the barn with two smaller screens in other parts of the barn. This all takes place in rural

Wrenshall and is a great way of providing the Northland a cozy place for watching movies. It is

Except for some lovely creative spelling (Janaki spells his name a bit differently), the words

provide an accurate overview of our continued activities in the barn. The artwork was created

in 2005 by then Wrenshall High School junior, Edward Knudsen. We’ve had a number of news

Scholtz, Valerie Coit, and Robin Decaire in 2004. I was able to talk to Scott Simon from morning

edition on NPR, we were featured in the Star Tribune, and we get regular visits from TV stations

and print publications. But this hyper-local coverage from a teenager is far and away my

Knudsen is now a successful IT professional. He currently serves as an information security

officer at the University of Wisconsin, Superior. In High School Knudsen was a self-declared

year of the festival, he told him he had made it in shop class because he was so inspired by

what was happening just down the road. As Knudsen presented the trophy he stated, “We get

to have this cool thing, right here in Wrenshall.”

We’ve been trying to live up to that standard for the past 17 years. We’ve screened

screened at SXSW and Sundance.

I caught up with Ed and asked him if he remembered making the statue. He didn’t miss a beat. “My brother and I went to one of the first screenings and it were so unreal for us. We were so excited to have this in our own hometown. I was trying to think of inspiration for this art project and that experience was so important. My art teacher, Kris Nelson, was really supportive. She got the work shown at an art exhibition at UWS and that was another added layer – it helped solidify my decision to attend that college”.

The barn didn’t just provide opportunities for locals. Mike Scholtz and Val Coit moved to Wrenshall in 2005 in some part to be closer to the festival they help manage. They both have successful creative careers. Scholtz’ latest documentary was recently aired on public television, and he regularly screens films at festivals around the country.

The barn has seen more than just movies: there have been new media art installations, an

indie music festival, a folk-dance blowout weekend (you have not seen people who can party

until you meet square dancers), a poetry reading in October where you could literally see the

words coming from the artist’s mouths because it was so cold, a contemporary art exhibition,

and a lecture about sundials from a pair of Italian mathematicians. It is a space for play, for

experimentation, and a showcase for hard work and creative brilliance. 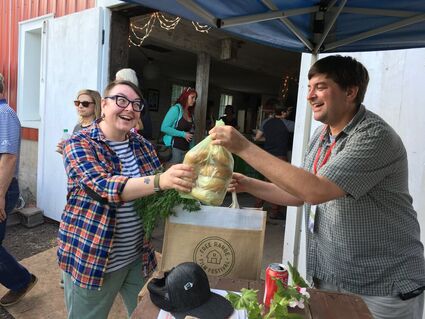 It has always been of this place (Wrenshall) — whether it was housing horses, cows, or art films — and I’m excited to see the place around it continue to flourish. Our guiding figurehead remains the “Jonake” as we try to continue to “make cool things in Wrenshall.”.\

This summer we’re making the festival again. Last year we had to put it on pause for pandemic

reasons, but we’re excited to bring it back in late August. We’ll be screening movies outside of

the barn, but we’ll still offer organic popcorn to put inside your bellies. Mark August 20-21

2021 on your calendar. We’ll screen the same program both evenings to allow for smaller

audience sizes. I already know there will be a documentary about a pet turtle. That’s cool,