50 years ago, Cloquet track had one powerhouse duo 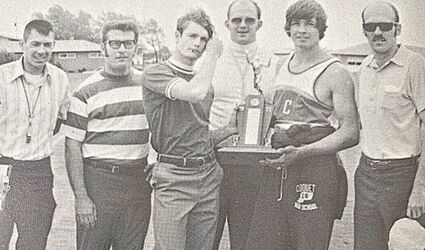 It's outdoor track season for local high schools and Rol Bromberg Field at Cloquet High School is bustling with more than 100 athletes on the track and field team who just combined efforts to win the Lake Superior Conference championship.

This time of year brings to mind a track feat accomplished by two Cloquet athletes - John Angst and George Lange - 50 years ago.

The Region 7 high school track meet in May of 1971 was held at the Washington School track in Cloquet. While most teams arrived in a bus or van, Cloquet's squad could have shown up in a Volkswagen Beetle.

George Lange was one of Cloquet's finest all-around athletes. Not counting his Academy Award-winning actress sister, Jessica, he's one of Cloquet's most notable graduates. He was about 6-foot-2 and 180 pounds of solid muscle.

Lange was the first person I ever saw dunk a basketball on a 10-foot hoop, not Wenberg's 8-foot hoop attached to a garage. He did it with two hands. There was lots of spring in those legs. He was a comparatively short center on Cloquet's varsity basketball team.

He was a phenomenal football player too, playing fullback and middle linebacker for the Lumberjacks and college football at the University of North Dakota on a scholarship with another Cloquet grad and linebacker, Denny Carlson.

Carlson and Lange are in UND's football Hall of Fame. He also was an excellent diver and sprinter on the swimming team before he went to basketball.

I couldn't find Lange, but I did talk to teammate Greg Hallback.

"In track, he could have also won the pole vault at the region meet, as he was very good in 10th grade until he broke his pole and his arm because he was getting too big," Hallback said. "In a Hermantown meet, he won the hurdles with a full cast on his arm."

"Others excelled in football, basketball, hockey, or baseball," Hallback said. "George excelled in swimming, diving, football, basketball and track. It's not only that, it's the combination of coordination, strength, speed, and toughness in such a variety of ways. Diving usually does not go with throwing the shot. George could run fast, hurdle, throw the shot and discus, and play basketball and football all well. He should have tried the decathlon in college. For my money, he was Cloquet's best athlete because he had such a variety of skills."

Lange studied avionics in college and became a pilot for Delta Airlines. His time in the hurdles set a region record and he placed in the state track meet as well.

I found John Angst, who now lives in northwestern Wyoming and has led an interesting life. We chatted about the region meet 50 years ago.

"It's funny because if the discussion ever comes up regarding the event or our track team at a bar or backyard or restaurant, it's hard for people to get a handle on it. Our races were still measured in yards. It was the 100-yard dash ... not the 100-meter," Angst said. "So people wonder, was their time incredibly faster?"

He said they won the region track crown in 1970 but had more depth, including Mike Hall, another champion sprinter, and some great relay teams. Duluth had its own track region in those days, which also made the state tourney achievable for smaller schools.

Angst grew up on the west side of Cloquet. He had two older brothers and said it often became "fight or flight" as he ran to escape their torment. They couldn't catch him. He also remembered winning dimes at Fourth of July races at Pinehurst Park.

"Len was really a great instructor and coach. He used the Fartlek - don't laugh - method of training. It was a Swedish technique having intervals of speed running followed by slower jogging," Angst said. "He'd take us way out to the Kantonen Road by where he lived, west of Cloquet, and have us run intervals back to the high school."

Angst recalled a keynote speech by Minnesota Vikings head coach Bud Grant at a CHS letterman's banquet. Bud talked about how important "the little people" are for completing the full picture for nearly everything.

For Angst, it meant the importance of the janitors, bus divers, cooks, nurses, secretaries, and other "unheralded" people. He said CHS had some of the finest people in those positions and he felt fortunate.

Angst tried other sports in high school, unsuccessfully, but he became very interested in curling when he lived in the Twin Cities area. He was an active member of the Frogtown Curling Club in St. Paul for many years.

Lange and Angst were Cloquet region track champions nearly 50 years ago to the day. I wonder if George Lange can still dunk a basketball. I wouldn't be surprised.

Steve Korby's interest in writing goes back to when he was in fourth grade and editor of the Scan-Satellite school newspaper in Scanlon. Steve loves sports, especially golf. He welcomes human interest stories and tales regarding Carlton County residents, projects, history, and plans. Send story ideas to [email protected] News.com.