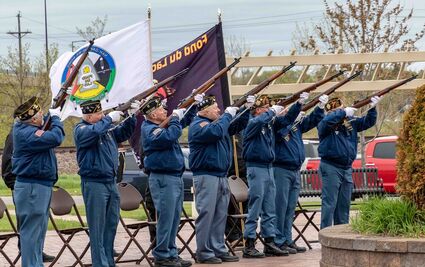 Members of the Cloquet Combined Honor Guard performed a rifle salute at a 2019 Memorial Day service.

While military organizations visited local cemeteries last Memorial Day despite the pandemic, members are pleased that this year's events will look a little more normal -

including the larger ceremonies at Cloquet's Veterans Park and Carlton's Hillside Cemetery on Monday.

"It's been a pretty hard year for veterans," said Gary Dahl, senior vice commander of both the Cloquet VFW and DAV organizations. "We're just trying to make sure we catch up with people that have died over the past year. It's important for the families."

Observed on the last Monday of May, Memorial Day was originally set aside to honor the men and women who died while serving in the U.S. military. Many Americans observe Memorial Day by visiting and decorating cemetery graves, holding family gatherings and participating in parades or other ceremonies. Unofficially, it marks the beginning of the summer season.

Local honor guard members and other veterans groups treat Memorial Day - and their stops at various cemeteries to play taps and salute the dead - as a sacred duty.

The Floodwood VFW Post 8299 will be at the park in Wright for services at 8 a.m. Monday. In Carlton, the largest ceremony will take place at Hillside Cemetery at 11:15 a.m.

In Cloquet, the events of the day culminate with a program at Veterans Park. The introduction and address will be given by Troy Smith, with guest speakers Cloquet Mayor Roger Maki and Fond du Lac veterans services officer Tommy Whitebird. Mark Goad will provide music for the services. There will be a flag raising, roll call of deceased veterans and a salute to departed comrades by the honor guard, including taps by Bryce Moe.

Here is a complete schedule of stops on Memorial Day for both the Cloquet and Carlton veterans groups:

Cloquet services are a joint effort of the American Legion Post 262, Veterans of Foreign Wars Post 3979, Disabled Veterans Chapter 18, American Ex-Prisoners of War, and their auxiliaries. 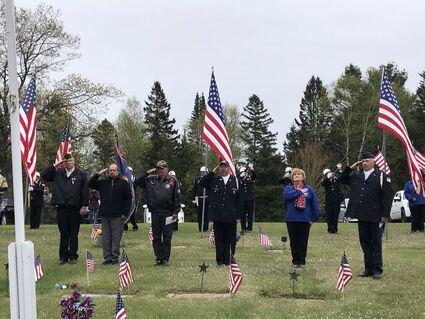