Graduations are back on track 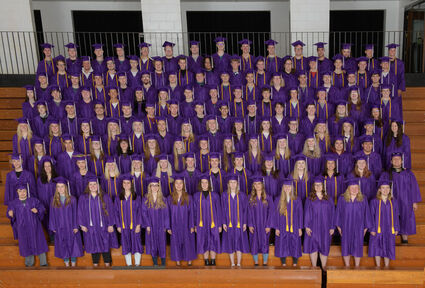 It was a decision no grandparent should have to make.

Phyllis Rousseau thought she was going to have to choose between attending the Carlton and Wrenshall graduation ceremonies — originally scheduled at the same time Friday — and how’s a grandmother supposed to choose between two grandsons who are both valedictorians of their classes?

Luckily for Phyllis, Wrenshall decided to change the time of its graduation program.

“They both have their speeches written and it’s working out perfectly now,” Phyllis told the Pine Knot News Wednesday, talking about how relieved she was to not have to choose between the two cousins. “Graduation is a big deal to me; it is to a lot of people.”

High school graduation season officially begins this weekend, with five schools holding ceremonies Friday in Carlton County. Ceremonies will look far more traditional than last year’s pandemic-challenged events, which included a drive-in-movie-style graduation for Cloquet, and parking lot ceremonies where students sat in individual vehicles before and after their names were announced.

Wrenshall’s graduation will begin at 4 p.m. Friday in the commons area, with a gathering at the city park to follow.

Carlton’s ceremony starts at 7 p.m. Friday in the school’s large gymnasium. Seating is limited to five people per graduate.

Fond du Lac Ojibwe School will hold its graduation ceremony at 6 p.m. Friday in the Ojibwe School gym. Guests are limited to five per graduate.

Cloquet will begin its graduation ceremony outside on the football field starting at 6 p.m. Friday. The outdoor venue is a change inspired by the pandemic, with ticketholders (each grad got five to give away) getting priority seating, and general seating open to others. If it rains, the ceremony will move inside to the middle school gymnasium, and only ticketholders will be allowed inside.

The final graduation ceremony Friday, May 28 will start at 8:30 p.m. at the Cromwell-Wright school. Graduation festivities will actually begin, however, with a “graduate parade” at 8:05 p.m. that will loop from the pavilion through town, to the Villa Vista and end at the school. Reserved seating will be set at graduation for all parents/guardians and their significant others. Others are welcome to attend.

Both Esko and Barnum will hold their graduation ceremonies at the same time a week later: at 7 p.m. Friday, June 4.

The Barnum ceremony will take place at Barnum High School. It will be livestreamed for those who cannot attend.

The Esko ceremony is in the school gymnasium, with preferred seating for parents and general admission for everyone else.

Thanks to rollbacks in the state’s pandemic guidelines, Esko high school principal Greg Hexum said Esko won’t have to restrict capacity or observe social distancing, masking or contact tracing at graduation. The layout of graduation will be updated, Hexum said. There won’t be whole bands or choirs at this year’s graduation; rather, they will feature several senior ensembles from band and choir.

Moose Lake will hold graduation ceremonies at 2 p.m. Saturday, June 5 in the high school gym. All are welcome to attend.

That’s a wrap for Carlton County graduation ceremonies, although the parties will likely be going on for at least a couple months.

Meanwhile, for future graduation ceremonies, proud grandmother Phyllis Rousseau has a word of advice for local schools. She would like to see area schools go back to working together so that graduation ceremonies don’t conflict, so kids can see other kids graduate and family members don’t have to choose between loved ones.

“It hasn’t been that many years since each school had a different night, and they respected each other and worked together,” she said.