Show airing today (May 28) will reveal if Kavanaugh prevails This screen grab from a promotional video for the game show Jeopardy! says it all. Carlton native Sam Kavanaugh is a Tournament of Champions finalist. The last of a two-show face-off airs today and will reveal who the overall champion is. For finishing in the top three, Kavanaugh was guaranteed at least a $50,000 payout. The champion receives $250,000.

Sam Kavanaugh was watching himself on Jeopardy! Monday night and it felt foreign to him. While that can be expected for a show that was taped two months ago, it's Kavanaugh's whirlwind success in the game show's "Tournament of Champions" that has him grasping for details of his experience. He won Monday, placing him among the overall top three contestants in the final round airing Thursday and today to determine a champion.

"It's bizarre," the 2009 Carlton High School graduate said Tuesday after watching the Monday show that had him cruising to a win. "I'm watching it and seeing a question, thinking, I don't know that. Then, there I am on TV, answering it."

That opening face-off in the semifinal round was taped early in the morning, followed by the two other semifinals that aired Tuesday and Wednesday. The championship round, a two-day affair on TV, was taped the same day after a long lunch, Kavanaugh said. While he couldn't divulge what the result ultimately was, the pace of the day and that final round had him forgetting what happened earlier in the day.

Kavanaugh has admitted that his competitors have shown a wider breadth of knowledge than himself. He has practiced strategy in the game to make up for it, he said. He launched into the final with $28,600 on Monday. The nearest of his two competitors tallied just $11,400. The moment of separation in the game came when Kavanaugh hit the Daily Double under the subject of "Non-Italian Roman Emperors."

He wagered $8,000. He said he didn't have to think long about it. If he didn't get the answer right, he'd still be in the lead.

"I did a lot of prep on wagering," he said, making sure they were "rational and not emotional."

The more automatic such decisions are, he said, the more he can concentrate on getting the questions right.

"Claudius and Caracalla were born in this Roman region in what is now the city of Lyon."

Kavanaugh mulled it over. "I won't say my geography of ancient worlds is super strong," he said. So he thought of France, and where Lyon was. Or, more to the point, on what side of what mountains did it sit? He had Transalpine Gaul in his head, but that seemed too archaic, too much for an answer on Jeopardy! "Keep it simple," he thought to himself. "If you give too much information, you're wrong," he said. Not enough, and the host might tease for a longer answer.

"It was a big moment," Kavanaugh said. He decided to keep it simple, and answered correctly: "What is Gaul?"

It was easy after that, and Kavanaugh was able to wager nothing in Final Jeopardy! He got that question correct as well, as did both of his opponents.

"It ended up being a runaway, an easy one" comparatively, he said. But it was much more pressure-filled than the round before that.

One would think the quarterfinal match last week would have had him sweating more, but it was the opposite, he said. He knew if he simply tallied enough mythical dollars with correct answers, he'd either win or have enough total points to make the wildcard round. He had a rough figure in his head going into the show that aired last Friday. He was actually down on the points board going into the Final Jeopardy! question.

It was another of those moments he had prepared for.

"The year before his 1809 birth, his parents acted in 'King Lear,' leading scholars to believe he was named for a 'Lear' character."

After a successful run in 2019, and lots of pandemic practice for the current tournament, Kavanaugh utilized more strategy.

He didn't know "King Lear" at all, and couldn't begin to guess at any characters in it. But he said he knows questions on the show often have more than one avenue to take when trying to divine a correct response. In this case, it was the date of birth.

He went through that era for famous American authors, which was the subject revealed in Final Jeopardy! Then he thought of one author who he remembered had parents the who were actors.

"I felt maybe better than 50-percent sure of my answer," he said, which correctly was Edgar Allen Poe. His opponent, who held a lead on the board, was likely to get it, he thought.

She wrote "Hawthorne," and the win went to Kavanaugh by $1. It was good TV, but Kavanaugh knew he had done enough before that moment to move into the next round as a winner or wildcard entrant because of his daily winning totals. 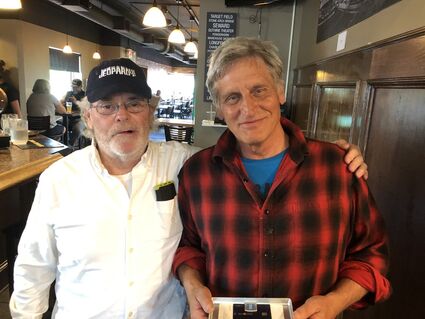 Sam Kavanaugh's dad, Ed, wore a Jeopardy hat he found in Sam's old room to watch his son May 21, and celebrated with teaching buddies, including Glen Sorenson (right).

Kavanaugh was planning to be in Carlton to watch the two-day final round with his father, Ed. His brother is also coming up to visit from St. Louis. He said he just might pop into the Streetcar restaurant in Carlton, owned by Sam's aunt and uncle, Rob and Teresa Kavanaugh. There's been a loyal fan club watching the show there the past two weeks and during his five-show win streak in 2019.

Kavanaugh has been loyal as well. While he lives in the Twin Cities area, he made sure that when his name and where he's from is used on the show, it states "Originally from Carlton."

He plans to return this summer to lead an annual community education science camp. He was the Learning Camp coordinator for many years. "It's a fun thing to do," he said.

Can his hometown base expect that he wins it all? Kavanaugh demurred. "I'll say, I at least got third. In the last two years there's been, what, 500 contestants. That's pretty good."

Answering "2021 Jeopardy! Tournament of Champions Winner" with "Who is Sam Kavanaugh?" has a memorable cachet about it.