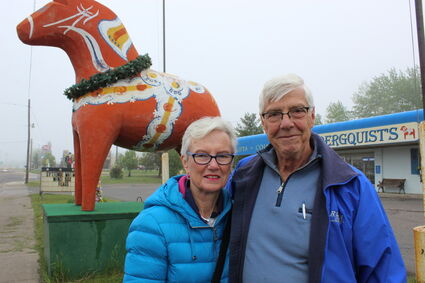 Vivian and Barry Bergquist may be leaving Bergquist Imports behind, but they hope to see the new owners continue to grow their unique family business.

Travelers and others driving into Cloquet from Interstate 35 are greeted by billboards and trees, and very quickly a huge statue of a bright rust-red-colored Swedish Dala horse in front of longtime local business Bergquist Imports.

In February, Barry and Vivian Bergquist sold the 73-year-old business to Scott Camps, who said he intends to continue with business as usual.

Barry and Vivian, on the other hand, intend to relax and travel more. They left for Florida the day after they signed over the business, and returned to Cloquet only last week, just in time for the lilac blooms.

Barry grew up in Bergquist Imports, because his home was also the base of business for his parents, Margaret and Richard Bergquist, in the early days.

"Our parlor was a showroom, our basement was for storage and packing, and the garage was stolen from the cars and filled with big boxes of things from Europe," he said of the former family home at 322 Avenue C.

A Swedish relative had given them the idea on a visit to the States, Barry said.

"He said to them, 'You should import Swedish gift items because you have so many Swedes in Minnesota, and they would love to buy these things.' So they thought about it and they went over to Sweden that summer and went to his place - that cousin owned the BRIO toy company - and bought all kinds of Swedish glassware and toys. They shipped them to Minnesota and went around to all the resorts and gift stores and peddled them.

"I was a latchkey kid, because I would go to school up here at Leach school and I'd come home but they were busy at work," he said. "I had a key hung around my neck with a string on it and I would let myself into the house and do whatever I wanted to do until they got home. The business was successful from the get-go, I think."

At age 11, Barry went on his first Scandavian buying trip with his parents: his job was to help carry the bags.

The business kept growing, eventually outgrowing their home and moving to a new location along the frontage road along Cloquet's Highway 33 (in front of what is now the Walmart store, but a field back in those days). As it grew, they kept adding buildings: one for the retail shop and offices, another for storage, then a 10,000-foot warehouse.

Barry didn't always work for Bergquist Imports. He studied business and economics at the University of Minnesota Duluth, and ended up with a job in sales out east with McGraw-Edison, where he met Vivian in a laundry room.

"He moved into the same apartment building that I was living in, in Quincy, Massachusetts, a suburb of Boston," she said. Vivian worked in the international division of First National Bank of Boston.

About that time, Barry's mother remarried - his father had died in 1969 - and the business was in turmoil after his sister, Carol, and brother-in-law quit.

"My mother asked me to come back and help in the business," Barry said. "So I gave my resignation to McGraw. But I kind of liked Vivian, so I popped the question."

"No, you didn't," she interjects quickly, and tells the real story: "He said, 'Why don't you come to Cloquet and see if you like it, and then maybe something will happen?' I thought, Are you kidding me? I have a great job, all my friends and family here. I know nobody out there. Why would I do that without any kind of commitment?"

They both laugh. "She was always the practical one," Barry says.

Not long after returning to Cloquet in 1974, he called and proposed. Vivian came and found she liked it here, even the cold weather because it wasn't as damp as Boston, and sunnier.

"It's been a great marriage and a great relationship," he said. "Vivian and I have gotten along very, very well. We've never had a fight, really."

She agreed. "I always stated my case ... we didn't alway agree, we did different things, though."

A couple years after they got married, Vivian started working at the business with the agreement that if it didn't work, she was the one who would have to find a different job, as Barry wasn't going to leave. But it did work, and they thrived side by side - Barry as head of sales, Vivian on importing, pricing, etc. - for close to 45 years.

Each January, they would pack up and head to various factories and massive gift shows in northern Europe for about a month, to choose what Bergquist Imports would feature in the coming year.

Although they were often fighting snow and a serious lack of daylight, the travel was fun, Vivian said. They also traveled all over the United States, and to other places, like Japan.

"My favorite part? Traveling and even doing the gift shows because we could visit people in various parts of a country," Vivian said. "Seeing all our customers and getting to know them better. We'd have a few days, many evenings too, when we could go around and look at stuff and places."

Travel will be part of their retirement. They had a great time in Florida, and stopped at Lincoln's presidential library on the way home. They want to visit more libraries. "We're going to stay involved in the community. This is our home," Barry said.

"Well, as long as we can walk up the stairs," Vivian quips.

It will be strange to be here but not be part of Bergquist Imports. On Monday, after posing for a photo in front of their store, the two of them wandered among the signs and painted figures that dot the property, looking like they were planning the next one, but probably not.

They'd been trying to sell for seven years, Vivian said, after their son, David, and his wife, Sandra Frimmerman-Bergquist, moved north to see if they would like to take over the business. It wasn't a good fit. 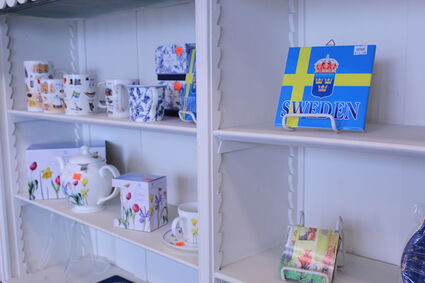 They were very pleased to sell to Scott Camps and his wife, United Way director Ali Bilden-Camps. Scott worked with them for at least a year - through the pandemic - before buying the business. He will do well, they think. All the employees stayed, so he has people like Deb Colombe, with years of experience, to help him.

And Barry and Vivian still own the Berggren Trayner Company, a decorating company the family bought in the 1980s, which operates out of a large warehouse behind the Bergquist Imports store. That business is still for sale and specializes in decorative tiles, magnets, plates, ornaments, dinnerware, mugs - such as the popular Lutefisk Soup mug - and more. Vivian describes the infamous fish (soaked in lye) as without much taste, but like eating softened Jello. And no, they don't sell actual cans of lutefisk soup.

"I hope people will continue to support Bergquist Imports and the new owner, Scott. He's a nice guy," Barry said.