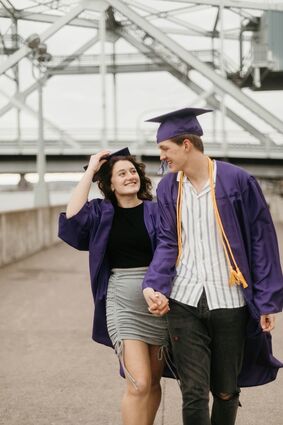 Lydia Swedberg is a hard-working professional photographer who specializes in couples photos and grads.

She is also 15 years old and a sophomore at Esko High School.

Balancing school and work can be challenging - especially without a driver's license - but it's a labor of love. And love is what makes Swedberg's photography world go around.

She tells a story of a proposal she photographed near Pier B in Duluth last Saturday. The young man who was going to propose texted her for weeks in advance.

"He wrote me novels about how perfect he wanted this engagement to be and sent me a picture of Pier B and the grounds and drew a circle where he wanted to propose," she said Sunday.

So she recruited good friend and Cloquet senior Lauren Sertich to put on her cap and gown so they could pretend they were shooting photos of Sertich. The couple came outside for a walk then. "I hear her say, 'oh, someone's graduating' and we just played it off, but as soon as I saw him reach for that ring in his back pocket I ran over there when he was down on his knee, and I got my shots. Their whole family came out of Pier B. I was smiling, Lauren was smiling so hard. It's like being part of a romance movie."

Hence her choice to narrow her focus to couples - true love - and grads, since she is a teenager. She doesn't do family photos anymore but loves doing weddings and elopements. "Seeing that intimate love, like, I just got to come here and be part of their biggest day ever," she said, adding that she truly enjoys the looks people give each other when they think the other isn't looking. "It's just the best joy in the world."

Back to the teenager part. Earlier this spring, Swedberg decided to offer free photo sessions to graduating college and high school seniors. She pointed out that people were very generous with last year's graduates when basically the end of their senior year was canceled or dramatically altered by the pandemic.

"Nobody seemed to offer anything for seniors this year," she said, adding that her brother is a senior at Esko. "I just thought it was like, 'oh, like they missed their whole school year too, like they just got this smidge of a quarter. They were affected by the pandemic massively. So I just thought it was fair that they got a little special moment to celebrate, even if they did get prom or graduation and whatnot, it was the least that I could do."

She offered a window of time for 15-minute sessions on certain days at particular locations - the aerial lift bridge was one - and people came with their caps and gowns. Swedberg said she probably spent about 90 minutes editing each 15-minute session. Then she shared the images with the grads through her website for free.

Part of what she's selling is the experience, Swedberg said.

"A big thing for me is not only taking pictures that you love when you get the gallery, but I want to have just as much fun when we're shooting," she said. "If you have a fun experience when taking pictures, you remember that when you see the pictures."

According to her website, lydiaswedbergphotography.com, Swedberg's prices range from $125 for a couples package with a minimum of 100 photos and one or two locations, to $400 starting price for elopements, and $1,500 starting price for weddings. A cap and gown session would sell for $100.

Although Swedberg says she sometimes feels like she shouldn't charge people to capture those precious moments, she is figuring out her value as a photographer. She credits two mentors - Kira Less of Minneapolis and Duluth's Janine Litzau, female photographers a decade or more her senior - who take time to mentor her when they can.

"They would let me assist at weddings and they really let me pick their brains and aren't judgmental about how old I am," she said. I couldn't have asked for better friends to make in the community. ... I doubted myself for a long time, it took their words to raise my prices. Hearing that [praise] from someone you look up to is everything."

In her fourth year of treating photography as a business (she started at age 12 and will be 16 this summer), Swedberg estimates she takes photos three or four days a week. For each photo shoot, she may spend about three hours or more on the computer, toning her photos. She doesn't sell prints, she sells the digital images and printing rights, and directs her customers to quality online photo labs if they want prints. This summer she is booked nearly every weekend with grad photos or weddings. 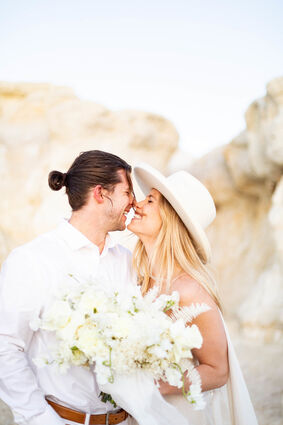 "I take one day a week off from photography just for school," she said. "Otherwise I do school and once 3 o'clock is done I edit photos for the rest of the night and work on emails and contracts, invoices. There's not much sleep involved."

Her business, which started with her taking photos in her yard - she grew up "smack dab in the middle" of Jay Cooke State Park - continues to grow. And that's OK with Swedberg.

"I wouldn't give it up for the world," she said. "Yesterday, I returned the pictures within like three hours of the proposal so they would be able to announce their engagement. I didn't know them, but I cried when he proposed. Hands down, that's the best part about what I do. Not the money, not the praise from people my age, but the connections you get to make with people and the important role you get to play in someone's life."