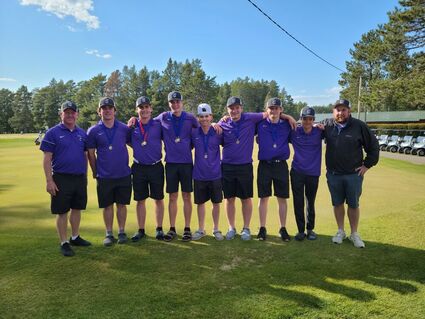 The Cloquet boys golf team ended the first round of its section meet two strokes behind Duluth Marshall Tuesday, pinning their hopes for an undefeated season on the second half of the section meet next week.

Lumberjacks head coach Aaron Young said it was a tough day in 30 mph winds at the Quarry golf course at Giants Ridge in Biwabik, but expressed confidence in his players.

He has a solid foundation for that confidence: The Cloquet varsity team has yet to be beaten in 11 meets this year, and won the Lake Superior Conference meet last week. Additionally, Cloquet had three players - Brayden Tyman, Sam Baker and Karson Patten - make first team all-conference individually as well.

Patten is only a sophomore. "He'll be our next No. 1," Young said. Senior Sam Baker undoubtedly has a secure grip on that top spot for this season.

Part 2 of the section meet will be played at Pokegama Golf Course in Grand Rapids Tuesday, June 1, between the top four teams from this week. Officials will add the total scores for both days to determine the winner.

The Lumberjacks finished fourth at the Class AA state golf tournament in 2018, and third in 2019. The golf season was canceled in 2020 because of the pandemic, so the Cloquet team is hoping to get back to state this year, and they should.

Although the varsity team is loaded with four talented seniors, coach Young is also bullish on the future of the team. He said eighth-grader Karson Young and freshman Anders Gunelson have been toggling back and forth for the sixth spot on the varsity team this year, with Young edging out Gunelson for a spot on the section team.

"The worst the JV team has finished in a varsity meet is third," he said, noting the JV went to three varsity meets this year and finished second, third and tied for second. "So we expect to see more good golf here for the next few years."

The Cloquet girls golf team placed fifth at Tuesday's section meet, with a combined score of 460. Only the top four teams advance to the next round of sections.