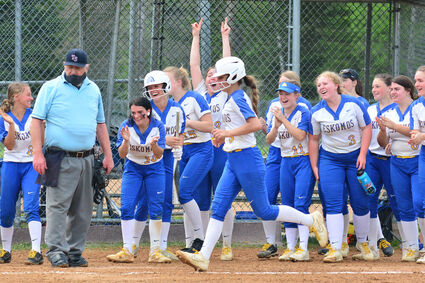 Once the Esko offense got going Friday, they made things look easy. The Eskomos rode shutout pitching from Amber Carlblom and a strong offensive output to a 13-0 win over the Bombers.

The Eskomos started things off with a bang in the second inning when Lily Hanson drilled her first career home run to make it 1-0. Hanson's homer was followed by a walk from Kaitlyn Adkins and back-to-back singles from Jayden Karppinen and Maya Emanuel to make it 2-0 Esko.

In the third inning, Esko added two more runs from Brenna Stark and Avery Kuklinski after both singled to start the inning. Stark scored on a ground out from Miranda Kelley and Kuklinski scored on a double by Hanson for a 4-0 Esko lead.

Things really took off for Esko in the fourth inning when they added five runs to build a 9-0 lead.

It all started with an Emanuel walk. After a strikeout, the No. 9 batter in the Esko order, Sydney Grayson, added a base hit to score Emanuel, who had stolen second. Then it was three hits in a row from Stark, Kuklinski and Kelley, and then after a groundout by Hanson, it was a single by Adkins to score the final two runs of the inning. 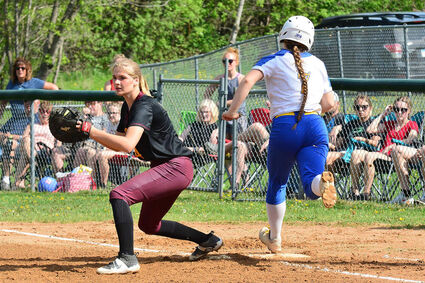 Esko's Lily Hanson tries to make it back to first base before the ball gets to Barnum first baseman Lenora Korpela as the Bombers host the Eskomos Friday afternoon.

"In the fourth inning we had an error and didn't charge a couple of ground balls - that got them going," said Barnum coach Dusty Collelo. "They have a lot of speed throughout their lineup and reached on a couple of infield singles. They followed that up with a nice line drive by Kelley and, just like that, they had five runs. It was a critical inning because it felt like we could have limited the damage to one or two runs."

For the Eskomos, the hits came together at the right time.

"It all came together with six singles and some good baserunning," coach Emanuel said. "There were no cheaply hit balls in that inning, and we finally started squaring up the ball."

In the fifth inning, Esko rapped out six more hits and plated four more runs for the final of 13-0.

"For the second straight inning Maya (Emanuel) started us off with a single, and the next three followed her," coach Emanuel said.

For the Bombers, KayeLea Poirier had a line drive double to lead off the fourth inning, but they were unable to capitalize. Kate Buell had five putouts at shortstop, including three in the first inning.