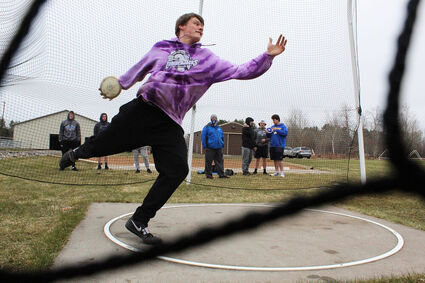 Gage Stankiewicz, seen here at a practice earlier this spring, has had some of the best discus throws in the state this season.

"Gage has grown into one of the best overall throwers in the state of Minnesota because of his relentless work at the technical side of the throws," said Esko weight coach Matt Peterson. "He is a gifted athlete who has long levers that can create incredible separation in throwing positions that leads to elite torque in his throws."

The 178-foot throw is the best throw in any class in the state of Minnesota this season, but the Esko senior has set his sights on an even bigger target.

"Without question, Gage is in contention to compete and win a state championship," Peterson said. "While that is a goal for him, his goal since day one was to throw 185 feet ... that would place him Top 10 all-time in the history of Minnesota high school discus throwers."

Peterson said Stankiewicz is still working daily on the finest details of the complete throw. "His drive and self-motivation is an inspiration to his teammates and all of us involved in Esko track and field."

With myriad Midwest college programs in pursuit of the Esko senior, he had the Polar League conference meet Wednesday in Two Harbors, the Last Chance Meet in Cloquet Thursday and then sub-section June 3 in Esko, followed by sections on June 10 in Cloquet and finally the state meet to be held on June 17.

"While he hasn't made any decisions on where he will continue his throws journey when his high school career ends, he will bring his love and passion for the throws to a college or university next year," Peterson said. "They will be lucky to get a very special thrower, but an even better young man."