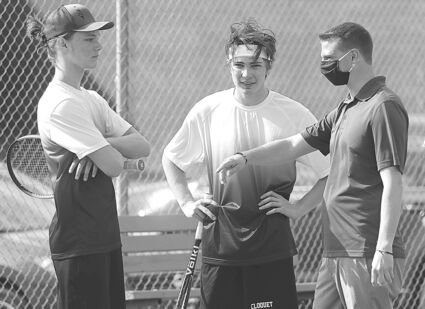 Cloquet tennis coach Derek Johnson talks to T.J. Sabyan (left) and Tyler Leppi during a break in their doubles match earlier this season.

The Cloquet-Esko-Carlton Lumberjacks boys tennis team ended its team season last week with a 6-1 section road loss to the Aitkin Gobblers. While the young team's season is over, there is still sectional individual play this week, with four Lumberjack players participating.

"We finished with a 2-10 record on the season," said CEC coach Derek Johnson. "We had a young, inexperienced team where we got our wins towards the end of the season. We have seen a lot of improvement from where we started."

CEC's lone win came at No. 3 doubles where T.J. Sabyan and Sam Bailey downed the Gobbler duo of Wyatt Crowther and Zander Peterson 4-6, 6-0, 6-2. At No. 1 doubles, the Lumberjacks team of Adam Blesener and Ty Wolter fell 6-1, 6-1 to the Aitkin team of Seth Watts and Jamison St. Clair. The CEC No. 2 team of Jonah Bryant-Nikko and Max Sundquist fell 6-3, 6-4 to Joey Haasken and Blaise Sanford.

"The nice thing is our players noticed the improvement, which is a good thing when you don't have a great record," Johnson said. "We can look back on the improvement and knowledge we gained."

The Lumberjacks singles players all struggled against the Gobblers and managed to win only three games in four matches. CEC's No. 1 player Logan Beck fell 6-0, 6-0 to James Much. Aitkin's No. 2 Owen Hagen defeated CEC's Evan Lavan 6-0, 6-1. At No. 3 singles, Cloquet junior Tyler Leppi dropped a 6-1, 6-0 decision to Ben Harris. Finally at No. 4 singles, Marco Zegan of CEC fell 6-0, 6-1 to Josh Hagestuen of Aitkin.

"Our seventh- and eighth-graders have stepped up in a big way, playing in most varsity matches," said Johnson. "Ethan Lavan (seventh), Joey bender (seventh), Marco Zegan (eighth) and Max Sundquist (eighth) are all part of that young group. Ethan Lavan started at No. 4 singles and worked his way up the rotation and even played No. 1 singles in a couple matches."

According to Johnson, the junior core players of the team also got solid varsity reps, which will be huge going into their senior season next year.

Individual CEC players headed to the section individual tournament are Ethan Lavan and Ethan Doty in singles. The doubles teams will be Adam Blesener/Logan Beck and Ty Wolter/Jonah Nikko-Bryant.

"Anything can happen in Individuals," Johnson said. "I'm looking forward to the two Ethans playing singles and getting that playoff experience. It was a good year with a lot of new faces. We kept it positive and fun, even though in matches we didn't get the results we wanted."