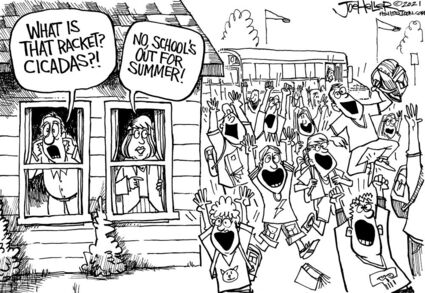 School is over for the summer, but the learning never ends, according to most professional educators. Kids learn a lot over the summer, even if it's not in a classroom. And it's a good idea to keep your kids challenged, mentally, and exercise their brains during the summer months. Not only is it good for your kids, it's good for the school teachers come fall, when they get their students back, to have them primed and ready to go.

I've been supplementing my kids' education forever, like many parents. We read at bedtime. We answer kids' questions on every topic from how books are made to issues not generally discussed in a family newspaper, if you catch my drift. We teach them how to tie their shoes, use an ax, cut the grass, and weed the garden. I've noticed that giving the kids an explanation of how these chores are done and why they're necessary has been very helpful in keeping the kids engaged. While they don't always appreciate the lessons, and sometimes would rather play ball with the neighborhood kids rather than unload the dishwasher, I'd say we've been pretty successful at keeping our kids sharp over the summer.

The library is a great place to keep the kids up on their studies. A trip to the library is generally well-received, not only because the kids can pick out books to read but there are toys for the littlest, computers for the older kids, and lots of fellow young teens hanging out for a social opportunity. So many 11- to 14-year-olds hanging out at the library certainly is annoying to those of us just trying to read a newspaper, but as a community, I think it's a lot better having them congregate there rather than in some vacant lot, causing trouble. I don't complain.

I asked Cloquet superintendent Michael Cary if he had any advice for those of us trying to keep youngsters engaged over the summer. Cary is not only an educator but also the parent of kids about the same age as mine, so I really value his comments.

He recommended we provide a mix of activities that keep children engaged mentally and physically. Like many parents, he encourages kids to read a lot. "Finding books that interest your children is a great way to make sure they keep their minds engaged from time-to-time over the summer," he told me.

But it's very beneficial to keep them moving, too. "Find things they enjoy doing that get them consistent exercise. Whether it's structured activities or fun with kids in the neighborhood, children need to stay physically active and healthy to function their best mentally," Cary said.

One challenge we have with our kids is combatting their love of anything electronic. Those tablets, phones, and computers can suck up a lot of a kid's free time, if you let it. Cary had some

thoughts on this issue as well. "Limit the kids' screen time and try to focus on personal interaction. This is especially important with the isolation children have experienced during the pandemic."

I try to limit screen time and it's a challenge. But once we break away from our devices, creativity soars. Nothing is more satisfying than convincing a kid to get off a device and then find them, a half hour later, outside playing a made-up game with their friends, complete with complex rules and regulations.

Cary agrees that giving kids free time to do what they want, within reason, is good for little minds. "Most importantly," he said, "let them be kids. I know I'm often guilty of providing too many structured programs and activities for my own children. Like adults, kids need time to unwind and pursue their own interests without the direction of others."

The expanded and remodeled Cloquet library should be a big draw for children this summer.

I read an interesting story in the Pine Knot News a few weeks ago about bogs. Ruth Reeves wrote the article, and my kids read it. Knowing I am fascinated with the Sax-Zim bog, they suggested we visit the boardwalks mentioned in the article. Since it was their idea, they didn't balk too much when I suggested they each write a report about bogs, and present them to the family before the trip. We're planning to go next Thursday. Maybe the kids will accidently learn something. It's a great way to have fun and keep the kids learning, even in the summer.