Cloquet is heading back to state tourney 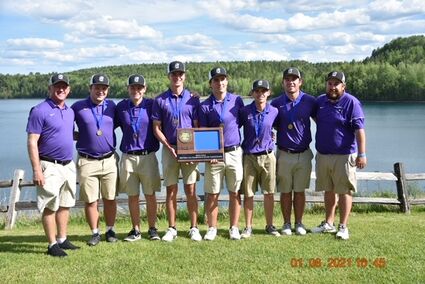 The undefeated Cloquet boys golf team successfully defended its Section 7AA title Tuesday, winning sections for the third time in a row and the fifth time in school history. After last year's season was canceled due to the pandemic, it was even more exciting for the team, which is loaded with seniors this year.

The Lumberjacks won with 640 points overall for the two-day section meet - held at the Quarry near Giant's Ridge - compared to 663 for second place Marshall and 698 for Hermantown.

There were a lot of ties at the section meet. Baker tied for first place with Marshall's Tucker D'Allaird. Steinert was in a three-way tie for seventh place with Denfeld's Nate Burke and Hermantown's Peyton Menzel. Karson Young was in a four-way tie for 16th.

"We got off to a good start, regaining the lead after just a few holes and then stretching that lead as the round progressed," Young told the Pine Knot Wednesday. "Our big advantage is our depth versus other teams in the area, with five of our six players finishing in the top 10 at section. It was good to see how they dealt with adversity the first day and came back and played much better golf the second day."

Baker had a dramatic finish to the day.

"Sam shot a 44 on the front but really came back, he was three or four under on the back side," Young said.

"He had a putt to win it and missed, so they ended up tying."

The entire team will play at the Class AA state golf tournament on June 14-15 because they won the section. The top five Section 7AA players not on the Cloquet team will also compete at state, held this year at Ridges of Sand Creek in Jordan, Minnesota.

Young is thrilled to be taking the team back to the state tournament, although he expects to see some tough competition there.

"We were able to win every meet we sent a varsity team to and that is a nice accomplishment, but Covid did limit our travel this spring and getting the chance to play stronger competition around the state," Young said. "I am excited to see how we perform at the state tournament."

This will be the team's third time at state, so they have lots of experience in addition to their depth: three of the top five players are seniors - Baker, Tyman and Steinert - Patten is a sophomore and Walsh is a junior.

Keeping the players relaxed and hydrated is key and what Young and assistant coach Jim Stafford will focus on at state.

On the girls side of things this week, four members of the Cloquet girls golf team qualified for the second day of the section finals Tuesday. Freshman JuliAnn Steinert was the top finisher for Cloquet at 210, just four shots out of qualifying for state as an individual. As a team, the girls finished in fifth place at the Section 7AA meet.

The state meet won't be quite the family reunion that sections were for the head coach. Young had five nieces and nephews playing at sections, including Trevor, Abigail and JuliAnn Steinert and Maddie and Karson Young. Aaron's brother, Kyle, is the JV coach and Maddie and Karson's dad so he was there too, with plenty of other family members watching, including dad/grandpa Ken Young.

"It was quite a family event," Aaron said.