It's a laugher, then a squeaker for Esko in playoffs 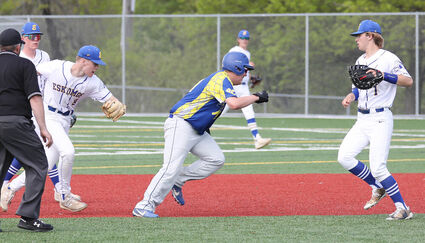 Esko's Noah Furcht, left, and Dane Hoffman catch a Rush City baserunner in a rundown for an out during Tuesday's 7AA playoff baseball game in Proctor. Esko blanked the Tigers in the first game in the section play. After losing in the evening game to Marshall School, the team faced an elimination game Thursday.

It's a big week for high school baseball teams this week as the sectional baseball tournaments kicked off with state tournament berths at stake. With presstime on Wednesday evening, we both preview and update games this week.

The Section 7AA tournament featured No. 1 seed Esko opening the postseason Tuesday against No. 16 Rush City and cruising to an easy 7-0 victory. Noah Furcht led the Eskomos with a three-hit night and also scored a pair of runs.

No. 2 seed Aitkin opened play Tuesday against No. 15 seeded Moose Lake/Willow River and defeated the Rebels 11-1.

No. 5 Eveleth-Gilbert opened play on Tuesday against the No. 12 seeded Crosby-Ironton Rangers and managed to narrowly slip by the Rangers 8-7.

No. 8 International Falls lost to No. 9 Duluth Marshall, as the Hilltoppers hung on for a 1-0 win.

After advancing with their opening round win Tuesday afternoon, the Esko Eskomos dropped a 5-4 decision to the Marshall Hilltoppers that evening. The Eskomos will now drop down into the losers bracket on Thursday and play Eveleth-Gilbert.

Eveleth-Gilbert fell to Proctor in the second round as the Rails advanced to play Marshall Thursday. Virginia and Aitkin also advanced in the lower half of the bracket with wins over Pine City and Greenway, respectively. Pine City and Greenway will also drop down into the losers bracket and will battle each other on Thursday with the winner taking on the Esko vs. Eveleth-Gilbert winner.

Teams that lost in the first round were eliminated from the tournament, while teams losing past the second round get a second chance via double-elimination rules.

The double-elimination tournament began on Tuesday with all eight teams opening play at the higher-seeded team's field.

No. 1 seeded Chisago Lakes hosted No. 8 Hibbing and managed to hold on for a 2-1 win. Chisago Lakes will now play host to Princeton, which defeated Hermantown in the first round of the playoffs.

No. 2 North Branch hosted No. 7 Duluth Denfeld and the Hunters posted a massive upset by downing the Vikings 14-2. The Hunters will now have to play the No. 3 seeded Thunderhawks at Grand Rapids on Thursday.

No. 3 Grand Rapids hosted No. 6 Cloquet. The Lumberjacks battled hard and fell 5-4 in nine.

Starter Jack Sorenson had an impressive outing. He pitched 7 2/3 innings and kept the 'Jacks in the game, but a misplayed ball in extra innings allowed the Thunderhawks to score the final run of the game. The loss means Cloquet will travel to North Branch on Thursday to take on the No. 2 seeded Vikings, who were routed by Denfeld.

No. 4 Princeton hosted No. 5 Hermantown with the Tigers coming out on top. The Hawks will now play Hibbing on Thursday in Hermantown in the second round of the double-elimination bracket.

The South Ridge Panthers received the No. 1 seed in the Section 7A tournament and a first-round bye. Thus the Panthers were able to sit back and watch as the Barnum Bombers and the Carlton Bulldogs opened against each other in a game that saw the Bulldogs score in the bottom of the eighth inning to win 5-4. Joey Solomon and Kristian Herman both had two hits for Carlton. Leading Barnum were Caleb Hautajarvi and Anson Vargo, who both rapped out three hits in the loss. The win moved the Bulldogs on to a late game on Tuesday against the Panthers.

Other first round games included: 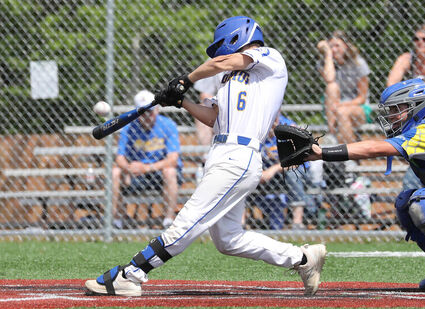 Chisholm also moved on with a 4-3 win over Deer River.

Silver Bay won 14-4 over Wrenshall to eliminate the Wrens.

As teams moved into quarterfinal action later on Tuesday, the Panthers finally got their chance to start section play. South Ridge proved why they were a top seed as they defeated Carlton 11-1. Cherry defeated Chisholm 6-2 in the second round as the Tigers continued to move on in the tournament. Nashwauk-Keewatin also advances with a 5-2 win over North Woods, as do both Cherry and Silver Bay in the winners bracket.

Carlton's loss drops them into a losers bracket game on Thursday vs. North Woods.