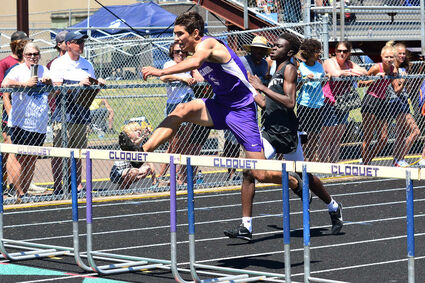 Cloquet's Nathan Genereau clears a hurdle during the 300-meter event. He took first during Saturday's Section 7AA meet in Cloquet.

And then the race goes by in a blur of adrenaline, with a dose of cheering thrown in.

Such was the case Saturday, when Genereau took first place in the Section 7AA boys 300-meter hurdles, earning himself a ticket to the Class AA state meet this Saturday at St. Michael-Albertville High School. The Cloquet senior finished in 40.94 seconds, 0.22 second ahead of Andover's Augustus Giddings at Cloquet's Bromberg Field, which was packed with fans and athletes enjoying a glorious day and a highly competitive meet.

"Paddy is very athletic, but also such a fun kid to work with," he said. "He is always smiling out there and joking around with his teammates. He has always had these performances in him -- without a junior season, though, I think nobody knew what he could do - we knew. Hurdles are such a different animal, as if you miss one you fall, and fall hard, so it is such a challenge."

Genereau was all smiles after his win, exhausted after giving it everything. He's always nervous before a race but part of succeeding at the hurdles is mastering the mental part, he said.

"You have to attack the hurdle and go for it," he said. "Especially when you get to the end and turn the corner and you see you have three more sets to go. Mentally, you have to keep pushing ... when you want to give up and slow down."

Genereau was the only Cloquet boy to qualify for the state meet Saturday. There were several third-place finishes for the Lumberjacks, but only the top two finishers in each race or field event moved on to the state meet, even though they made the podium. Knowing that next year there will be three classes in track - Cloquet will remain in AA but many of the larger teams will bump up to AAA - made Saturday a little bittersweet.

Prosen said Cloquet has always held its own in the larger classification, and will still not be "the big school" in terms of enrollment in AA next year. But "we would have sent a busload of kids to state this year under next year's classification. That would have been fun, but we will be right back here next year, as we hope to keep getting better."

Those oh-so-close third-place finishers for Cloquet include:

• The boys 4x400-meter relay team of Cale Prosen, Nate Bong, Paddy Genereau and Logan Dushkin. Ranked seventh, the team moved up from fourth after Cambridge, which initially placed second, was disqualified for throwing their baton after the race.

While Genereau was ecstatic to win the hurdles, it would have been the icing on the cake to also go with his relay team. "It would have been great to go down with the boys, one last run together, but we gave it our all," he said. "It just didn't happen, but it's OK."

The boys 4x400 team finished in a record 3:33.96, behind Andover in first and Forest Lake in second.

Genereau had a fast time, just not his best. Wind was a factor, but not completely. "You want it to slingshot you out of the corner. That last 100 meters when you can have the wind somewhat on your back definitely helps with the mental aspect, and it was pretty much the opposite of that on Saturday," he said.

Missing his junior season of track because of the pandemic made Genereau value his senior season, his coaches and his teammates that much more. It still wasn't an entirely normal year, but things turned out pretty great for Cloquet. The boys team took second at the state True Team meet, and won the Lake Superior Conference.

Genereau thanked his family, his coaches and teammates for always pushing him. Prosen and Genereau both gave hurdles coach Tim Anderson credit for helping Genereau (and the girls' Olivia Jameson) fine-tune their hurdling technique, from steps to timing, training and that all-important mental control.

He's also looking forward to running track and playing soccer in college; he will be attending St. John's University near St. Cloud.

But he will miss the team he had here. They made running fun, and as a team things were relatively carefree and enjoyable, "as it should be," Genereau added.

"It's gonna suck to leave because it's a great family," he said. "The coaches are absolutely amazing. Coach Prosen is a great head coach. I'm glad I got to spend the time I did with them."