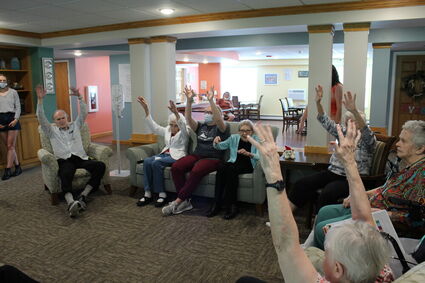 Evergreen Knoll recently started a cognitive care program designed specifically for the memory care residents. It offers short, simple activities - exercise, songs, games, questions and more - and it's having a positive impact on the people who live there, many who had slowed down as the Covid-19 pandemic lingered.

In the waning shadow of the pandemic, something special is happening at Evergreen Senior Living in Cloquet: residents of the two memory care wings are "waking up."

No one died from Covid-19 at Evergreen Knoll, but the cure of social distancing brought its own challenges.

When visitors were no longer allowed, in response to the pandemic, 95-year-old Evelyn "Evie" Graham had a hard time understanding why her family stopped visiting her in the memory care unit. This spring, she broke down in tears in a call with her daughter because she thought her family was angry with her. "I don't know what I did to make them mad," she said. She simply couldn't grasp the idea of a pandemic and all the restrictions that came with it. During the 15 months of pandemic restrictions, she both her Parkinson's disease and dementia advanced.

"I felt like we had lost her," daughter Norma Graham said.

Steve Kolodge, whose mother Lois was in an assisted living apartment at Evergreen Knoll and recently moved to one of the two memory care wings, said it was difficult for all. "The residents were basically like potted plants in their apartments," Kolodge said. "Everyone declined."

But congregate care facilities had very specific rules they had to follow, as dictated by the Centers for Disease Control and Prevention and the Minnesota Department of Health.

But things are changing now, and it's not just because of vaccinations and visitors, although both have helped. Two months ago, Evergreen embarked on a new cognitive care program designed specifically for the memory care residents. It offers short, simple activities - exercise, songs, games, questions and more - and it's having a positive impact on the people who live there.

"To me, it's like people woke up," said activities director Connie Kalli. "It gives them a purpose and direction for the day."

Most activities last 15 or 30 minutes.

Staff don't force people to participate. There is a way to ask that makes them more likely to join in, Kalli said. And once they're there, most of them find they want to stay.

The group activities start slowly on this particular Tuesday afternoon in June. Staff members and residents gather in the communal living area, sitting together on various chairs and couches. They do stretching exercises, starting with the neck, then the arms, the back and side, legs and feet. Those who are able add 1-pound weights. They march to a recording of "When the Saints Come Marching In." There is lots of laughter, and some questions about the visitors with cameras. Resident Assistants gently coax participants when they don't wiggle their fingers or otherwise get with the program.

After a half-hour of very gentle movement, it's time for "Evergreen choir," with a showing of a video of a woman playing older songs on the piano, with lyrics scrolling across at the bottom of the screen, as many of the dozen or so people gathered around sing along.

Graham watches from a chair about 25 feet away, relishing that her mother is participating, bobbing her head to the music, mouthing the words. She says it looks a little bit like they're having a Tupperware party.

Later on, in her room, Evie said she likes some of the activities and games; others, she doesn't like so much. She likes it there because she has "freedom to come and go," she said. "They don't make you do things; you're your own judge."

Staff are very respectful of the residents, Graham said. Evie has lived in the building since she was 89, when she drove herself there in her own car. She started out with an assisted living apartment and moved later to a room in the memory care wing. Her mother has always been a bit of a spitfire, she said, very independent and ahead of her time.

Kalli tells Graham later that her mom is super-competitive when they play games. "I call her the "in-it-to-win-it gramma," Kalli said. Graham said her mom sometimes calls it "school" and other times tells her she's at a party and doesn't "have time to talk right now."

As activities director, Kalli loves the new program even though it's far more labor intensive, describing it as "cool" to one of the assisted living residents, who seems a little jealous that the memory care folks get daily singalongs.

Evergreen health services director Julie Jones tells of one resident who is nonverbal in her dementia, but when they put the music on she starts to mumble and sing along. "I really feel they come alive and awake, smiling and laughing and teasing each other," she said.

The date is emblazoned in Evergreen Senior Living director Terri Langevin's memory: March 11, 2020. That's the day they were told to lock the doors and not allow visitors at Evergreen. Residents had to eat in their rooms and stay away from other people to avoid catching Covid-19, which the world was quickly learning killed the elderly at a far higher rate.

"It was the eeriest feeling to lock that door," said Jones. "Surreal. And I didn't realize then how long it would be."

"Covid was miserable, absolutely torturous, especially for residents with dementia," said Langevin. "They just lost so much stimulation, not being able to see their families."

A resident asked her how long the doors would be closed to visitors and Langevin recalls telling them she expected to open things back up in two weeks. Although there were constant changes to the protocols - people went from eating in their rooms to sitting 6 feet apart, e.g., - things didn't really start getting close to normal until the past couple months.

Langevin was lucky. She could visit her father at Evergreen, because she worked there. But even with her frequent visits, she could still see a decline without the rest of the family being allowed to come.

It was a long year-plus of often-changing Covid restrictions. Graham remembers trying window visits with her mother last summer. They had to stand 6 feet apart and her mother struggled to hear them, so she brought a white board and would write and then her mother would respond verbally. On Christmas Eve, Graham was the one family member who got to visit for an hour. "It was tragic," she said.

Although Evie was doing things to stay busy, such as painting dozens of birdhouses, her abilities were slipping away as the period of increased isolation dragged on.

Use it or lose it

Designed 20 years ago by occupational therapist Theresa Klein, the cognitive care program - called the Evergreen Program here - is designed to engage people in activities together. Not everyone will engage the same way: maybe someone with more severe dementia will simply be awake and listening, while others are moving, clapping hands or talking.

"There's a saying with dementia: if you don't use your skills, you lose them," Klein said in a phone interview. Now a consultant for many different senior care facilities, Klein creates activities that involve all the senses and use a lot of music and movement, and sometimes they even bring in entertainers.

The goal is to avoid passive activities such as watching TV or sleeping the day away, to find a balance between rest and activity. "By engaging people, they're remaining involved in a community where they're able to interact," she said. "We want people engaging, socializing, and expending energy."

In the memory care wing, they cook on Tuesdays, e.g., although Kalli said the following week they were going to spend that time focusing on different citrus fruits: smelling, tasting, touching, discussing.

Kolodge says his mother doesn't like it - she's never liked change, he explains - but she's participating, and it's making her sharper and stronger. Her kids are thrilled with the program. "We've seen some changes already, because she was really sedentary in her apartment [during Covid]," said the former firefighter/EMT. "She's very active and I hear she's a bingo champion," he added.

Not only do the activities help with physical health, they help mental health too. Staff member Elise Lund said it is fun to hear the stories people tell, stories they weren't hearing before. And, because people are more active, there are fewer behavioral issues. They don't see people getting irritable and restless at sundown; instead, they are ready for bed when the day ends, because they've been active and engaged.

"Before we started this, my dad would want to know what's going on and try to find something to do, and he would get bad ideas in his head," said Langevin, explaining he would get agitated and sometimes act out. "Now that he's got something to do he's in a much happier place." 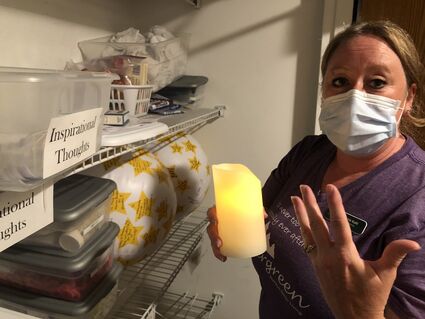 Activities director Connie Kalli shows the electric candle Evergreen residents pass around every night when they what they are thankful for.

Graham marvels at the difference it has made in her mother. She said she is getting her mother back, mentally and physically. When she came to help her shower after Covid, it was difficult to get Evie to grasp the shower bar tightly, increasing the risk of a fall. A couple weeks ago, she didn't need a prompt, and she grabbed the bar with real strength in her hands.

Small steps add up to meaningful change, and a better quality of life.

In the two months since they started the Evergreen Program, Jones said, falls are down, behaviors are down and as-needed medications are down.

That means the program is working, Klein said.

"In occupational therapy, we don't just focus on what people can't do, there are a lot of skills they have left, a lot of living left to do," Klein said. "My passion is helping families and caregivers help them do that living."

Graham said she feels very lucky that her mother is participating in the new program, and praises Evergreen for making the investments in programming and more staff to make it possible.

"I thought it was over with Covid," she said. "This is like a reprieve. Nothing can top that."