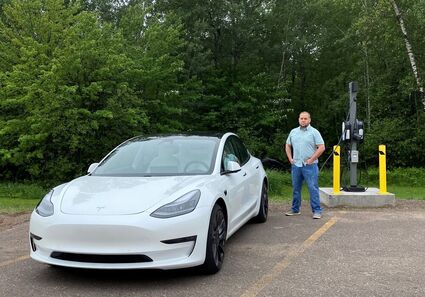 Fond du Lac Band member Dan Danielson charges his electric vehicle at one of the three charging stations that were installed on the reservation.

The Fond du Lac Band is leveraging funding from the Volkswagen emissions settlement to build electric vehicle charging stations and replace diesel vehicles with cleaner technologies. A $2.8 billion Mitigation Trust Agreement was created from the $14.7 billion series of settlements Volkswagen entered into after the Environmental Protection Agency's allegations of Clean Air Act violations six years ago. The trust was set up to offset excess emissions caused by Volkswagen's vehicles, some of which might have emitted up to 30 to 40 times more pollution than allowed by law.