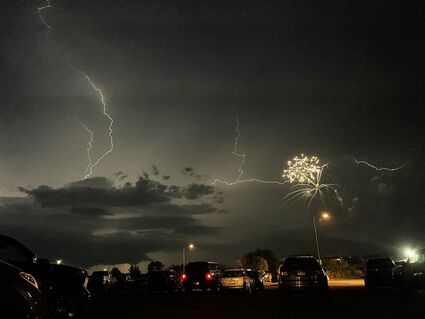 Thunderheads met with fireworks on the Fourth of July in Cloquet Sunday night, making for an interesting cap to a brutally hot day that edged into the mid-90s. Photographer Jada Hovi said she enjoyed the "dual show" since Cloquet didn't have fireworks in 2020 because of the pandemic. Hovi snapped this photo on her cell phone from a parking lot near Avenue C in Cloquet.

In a normal year, the oppressive heat over the Fourth of July weekend may have kept people home or at the lake. But 2021 isn't a normal year. We are free to go about our community business as the Covid-19 pandemic eases. And as the temperature gauge rose into the mid-90s Sunday, people kept flocking to downtown for the 11 a.m. parade. Not everyone made it through the entire lineup, seeking shade here and there or some other cooldown.

The scene was a sure sign that things are coming back to normal. As was the one on Dunlap Island afterward as people mingled about the NorthEastern Hotel & Saloon for drinks and a gander at the old cars on display. Because of a lack of vaccinations for children, events at Veterans Park did not take place, but it's questionable just how long the young could have withstood the heat after a withering parade experience.

Water bearers were the heroes of the parade, notably a first-time entrant, the trailer for Ed Oman Construction of Duluth. It was simple but brilliant parade float logic: It's hot, so let's just fill the trailer with water, get some employees to sit in it and douse people.

Parade watchers gladly lined up to get soaked, and the gutters of Cloquet Avenue glistened and wet shirts gave some relief. This is Oman's first year of doing parades, and Ed Oman credited his wife, Sam, with the idea of the water. "It was a lot of fun," he said.

The trophy for most patriotic entrant went to the Combined Cloquet Honor Guard float, which included Legion, VFW and DAV members, while the trophy for best music went to Abra's 1929 Model A classic car, which blasted the Beach Boys on its cruise down Cloquet Avenue.

Pinehurst Park was the place to be for sporting types on July Fourth, with the 10th Sawdust 5K race kicking off just after 8 a.m. and the second 3-on-3 basketball tournament starting at noon. Despite the sun and the heat, the basketball courts were humming for more than three hours as 20 teams played their way through the double elimination tournament.

As the heat of the day continued into the evening, thunderheads lurked about at dusk and threatened the fireworks over the St. Louis River in Cloquet. It created a surreal atmosphere as professional and amateur pyrotechnics mixed with streaks and flashes of lightning from Mother Nature. 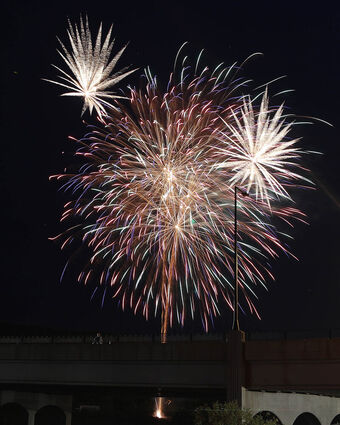 Fireworks light up the sky over the St. Louis River and the Highway 33 bridge Sunday night. The fireworks began about 15 minutes early as stormy weather threatened from the west.

With no organized activities in Veterans Park this year, people found their own places to watch the fireworks. Jada Hovi enjoyed what she called the "dual show" of fireworks and dramatic lightning since Cloquet didn't get to hold a fireworks show last year because of the pandemic. A good-sized crowd came to the Northeastern for music by Ryan and Crimsen Hanson and stayed for the fireworks. It felt like the spectacular explosions were set up just for the 100-plus-year old bar, as they loomed large over the bridge spanning the river.

In the day's wake, there was a feeling that a corner had been turned - on the summer and on the pandemic shadow. More town celebrations are coming (see Page 15), and likely in more moderate weather and with a nod here and there to the lingering threat of Covid-19 variants to those who aren't vaccinated. But people are hungry to celebrate again and they will make it work.