From Carlton County to world's forests 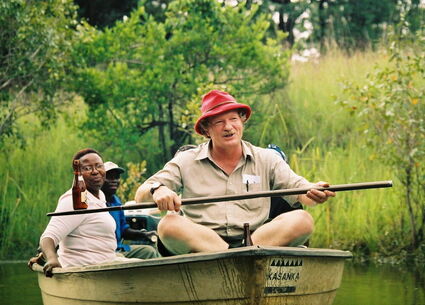 Roy Hagen wears his famous red hat while on a retreat with colleagues to Kasanka National Park in Zambia. He is handing off a beer with his paddle to his boss, Nick Sacrum, and Sacrum's soon-to-be-wife, in another canoe.

After 42 countries, one bear fight, and two attempted coups d'etat, Cloquet resident Roy Hagen has a resume to make any forester jealous. He has spent the majority of his forestry career in Africa and French-speaking countries and has created many memories and stories of his travels.

Hagen grew up on a small dairy farm 3 miles outside of Barnum. More than half of the farm was wooded, and Hagen developed a special love for the forest. He found his passion for forestry while planting trees through the 4-H program, and in the eighth grade decided on his future career.

After graduating from Barnum in 1966, Hagen went to the University of Minnesota for his bachelor of science degree in forest science with an emphasis in natural resource management. During his senior year of college, Hagen helped organize the first Earth Day event in 1970.

"Involvement with Earth Day was a natural for me - I had already read several books, including 'Silent Spring,' on environmental problems. I helped with some of the planning, prepared an exhibit for the student center, and attended all the events," Hagen said.

This event was one of many where Hagen realized that urgent action was needed to preserve the earth.

Also during his senior year, Hagen learned of a three-way Peace Corps program through the university's forestry campus, the Peace Corps and the Moroccan government. Through this program Hagen worked as a Peace Corps volunteer and arboretum manager from 1970 through 1973. With no electricity, Hagen was immersed in the local culture, and became quite fluent in the Moroccan dialect of Arabic.

"[The Peace Corps] was a life-changing experience," Hagen said. "That's what got me started."

Hagen recalled a few attempts to overthrow the government while he was there, with one happening only 6 miles from where he lived at Oued Cherrat, when the opposition attacked King Hassan's birthday party. He also experienced a "bloody coup" during a consulting job in Ouagadougou.

"I was one of the first to drive the road from Rabat to Bobo-Dioulasso, and passed through several checkpoints manned by teenage kids who had just been given Kalashnikovs and made members of the Committee for the Defense of the Revolution - that was a bit scary," he said.

After returning from Morocco, Hagen pursued his master of science at the U of M in forest resources with an emphasis on ecology, statistics, and remote sensing, the process of detecting and monitoring an area's physical characteristics by measuring its reflected and emitted radiation at a distance, typically from satellite or aircraft. When Hagen wasn't studying, he spent his time mapping wetlands at the university's remote sensing lab. During his time at the lab, three employers looking to recruit a French-speaking forester with a remote sensing background to work in Africa approached Hagen. He was hired by the third employer, and spent close to three years in Ouagadougou, the capital of Burkina Faso, West Africa. That trip kickstarted his international career.

At the same time, Hagen was starting a family. He married Mary, a Cloquet graduate. They had three girls, Kira, Summer and Elizabeth.

Hagen's travels made family life more challenging. Leaving home for periods of time and working as a contracted employee also made it hard to find stability. When Hagen was hired for long-term contracts overseas, usually for around three years, the family frequently went with him for half of it. Together, the family lived in Upper Volta from 1979 through 1982 and for six months in 1985, and in Madagascar for a year-and-a-half before moving back to Cloquet, where all three daughters graduated from Cloquet High School.

Over the last 20 years, Hagen has mostly worked for various United Nations agencies to improve the conservation of biodiversity and sustainable land management, including sustainable forestry, largely in Africa. When working in African communities, Hagen's main focus is helping to structure local communities to control the access and use of their local forest, and then working with them to develop forest management systems.

"I couldn't imagine doing anything in the U.S. that was half as exciting as what I've been doing overseas," said Hagen.

elephants and chimpanzees are poached for their meat. When the FAO (Food and Agricultural Organization) approached Hagen and asked him to be the lead for the design of a wildlife management project, he immediately said yes. The project spanned four countries - Gabon, the Republic of the Congo, the Democratic Republic of the Congo, and the Central African Republic. Hagen believed that deploying traditional game wardens wouldn't solve the poaching problem, and instead structured and empowered local hunters and communities to control access of the forest and wildlife.

"[We worked] with them to develop regulated hunting systems for the sustainable production of bushmeat for themselves and for markets," said Hagen. One of the conditions for communities to be empowered to manage wildlife was that they must discontinue the hunting of protected species like elephants and chimpanzees.*

When he and his team finished, they had operational community management systems in the Democratic Republic of Congo and Gabon. The European Commission was so pleased with the results that it pledged substantial funding to try to replicate or adapt the project to other parts of the world.

This project is one of several that has made a lasting impact on fragile environments and communities.

Hagen's favorite part of his job is working with people from different ethnic groups, cultures, and backgrounds. He usually works on a team of members from various academic disciplines.

"I think it gives me an extremely different view of the world from most people," said Hagen.

Over the course of his career, Hagen has traveled to 42 different countries and has spent half of his time in French-speaking countries. Morocco and Madagascar are two of his favorites.

He has been to Madagascar on 12 missions and calls it one of the most fragile ecosystems he has ever worked in. There, he has implemented biodiversity conservation, environmental planning and institution building in protected areas.

Covid-19 drastically changed the way Hagen worked. In January of last year, Hagen was two days away from traveling to Zambia to work on a biodiversity project when the travel bans were initiated. Hagen instead had to work with his colleagues via Skype and other communication platforms to complete his projects. 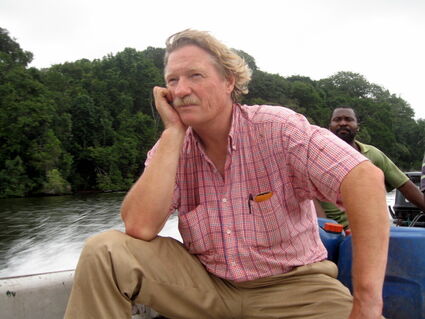 Hagen rides in a motorboat through the Congo Basin with a colleague.

Now that the Covid-19 precautions are easing, Hagen would like to return to in-person work. Recently, he applied to be team leader for the evaluation of a United Nations development program project in Pakistan. There, he would evaluate their attempts to improve sustainable forest management throughout the country. Additionally, he has applied to be a natural resources support consultant for 11 months with the FAO's programs across Africa. He looks for jobs that would be fun and intellectually challenging.

Hagen has also developed interests outside of his work, such as growing trees and mushrooms, but his passion still lies in the environmental world.

He eagerly talks about his career and why younger people should consider majoring in forestry.

* This section was corrected on July 12, after the original story was published, to clarify that the killing of protected species was discouraged as part of the project.