3-on-3 tournament heats up on the Fourth 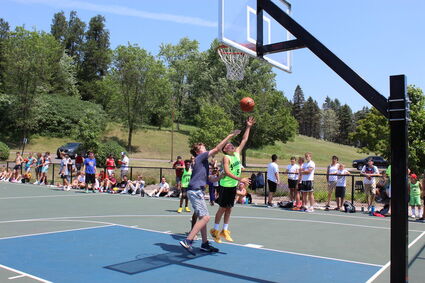 Cloquet's Pinehurst Park was a sea of sweaty ballplayers Monday afternoon, with a turnout of more than 20 teams for the annual 3 on 3 basketball tournament. With two halfcourt games happening simultaneously - each one with an official referee - the courts were buzzing. Meanwhile, the fences were draped with players, coaches and supporters watching and/or waiting their turn.

Organizer Paul Cameron said it was another great year of hoops. "Everything went off without any problems, people were patient, and despite the heat it went well," he said.

For the first time the tournament also featured some younger squads.

"This is an all-age tournament and we had four or five middle-school-age teams," Cameron said. "They were awesome hoopers. I paired them up against each other in the first round. Then in the second round they were kind of thrown to the wolves, but they all played well."

Cameron came up with the concept of the tournament in 2019 along with a couple fellow Cloquet grads, Travis Evers and Jackson Nemmers.

"In my opinion, Pinehurst Park is the best outdoor basketball court north of the Twin Cities," Cameron said. "We were playing down there and we were just talking about how nice it would be if we had a tournament here. I called Alyson Leno from the Chamber of Commerce, and she made it happen."

Cameron organizes the event mostly via Instagram and email. Each team consisted of three players and one alternate, which allows for substitutions. With temperatures in the 90s on Sunday, players needed a rest.

"It was hot, and guys were definitely getting sunburned as the day wore on," Cameron said. 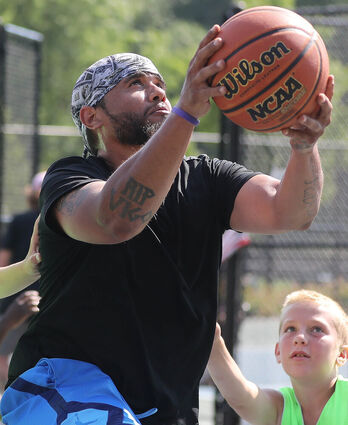 The team that handled the heat best was a crew called the FDL Boyz, which included players Sus Delapaz, Connor Barney, Moe Crawford and Treshawn Brown. FDL Boyz won the event by beating a Superior team called the Elite Amigos. Delapaz was also named the MVP of the tournament.

On the lighter side, a team called the Shlammers won the Most Drip Award, a slang term for best swag or best style. The Shlammers came out in jerseys that mimicked the 2008 basketball movie "Semi-Pro" with Will Ferrell. The sponsor in the movie was Flint Tropic. The Shlammers wore jean shorts along with their turquoise Flint Tropic jerseys.

"They really rocked it," Cameron said. "It was just a lot of fun."

A number of local sponsors also stepped up to provide prizes and water, including Gordy's Hi-Hat, Pedro's, Carmen's and Culligan of Cloquet.

"I'd love to get more sponsors because there are a lot of people at the event watching the games," said Cameron. "I just think with our venue and with some more sponsors, we can really make this grow into a big event."