Footrace fun on the Fourth 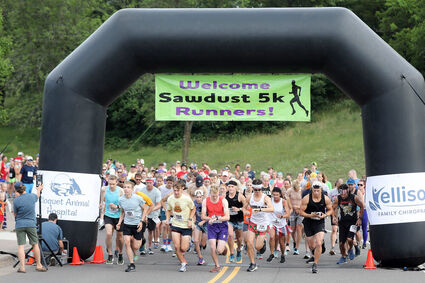 Runners leave the starting line for the annual 4th of July Sawdust 5K at Pinehurst Park. The 2021 race

"It's awesome to be back!" Those were the words uttered by Sawdust 5K race director Jeff Leno over the weekend as the fan-favorite race made its return after a 1-year hiatus due to Covid-19.

"It was amazing and awesome to be able to put the race on again," Leno said. "It would have been tough if we had to cancel the race again like last year. We start heavy planning in February and March. Back when we started this year, we weren't sure we would be able to run again, but it all worked out and it was fantastic."

This year's 10th running of the Sawdust didn't disappoint, as more than 300 runners converged upon the Pinehurst Park area early Saturday morning. The race consists of a massive inflated arch over the start and finish line, music to jack up the excitement and an array of colors that gives the race its ambiance.

The Sawdust is known as a tough out-and-back course with lots of hills, but runners are buoyed by the cheers of Lumberjack athletes.

"It is amazing the support we receive from the athletes in Cloquet," said Leno, a former Cloquet High star athlete himself. "Coaches like Steve Battaglia, Paul Riess, Tim Prosen, Jeff Ojanen and others are just great for the race. They bring their athletes and the players are on nearly every spot along the course to cheer runners and walkers on."

Proceeds of the race each year are donated to the Cloquet High School's athletic department, so the turnout of CHS athletes is greatly appreciated by race organizers.

As much as the Sawdust is known as an honest course for runners, it also features a lot of walkers negotiating the hills participating for fun.

Started by Jeff and his wife, Alyson, not long after they moved back here, the Sawdust is a family affair for the Lenos.

"I don't know if people realize how much work my parents have put in to help this race out," Leno said. "Without Alyson and my mom and dad [Curt and Mel Leno], this wouldn't be possible."

In fact, Curt Leno handmakes the wooden medallion-style medals given to all finishers of the event. The medals are cut with a band saw and then individually polished by hand.

This year's winner of the 5K men's race was Andrew Papke-Larson, with a time of 16:35, followed by a trio of 17-year-old runners. Cloquet senior Sam Buytaert was just 25 seconds behind Papke-Larson to finish as runner-up, while Jake Mertz and Xander Schroeder finished right behind in 17:09 and 17:54, respectively. Barry Fischer, 49, took fifth in a time of 17:59.

Following the Sawdust, the crowd of runners and fans headed downtown to Cloquet Avenue for the July Fourth parade. Before the parade, they were treated to the LaVonna Prevost 1-Miler - which is run smack-dab down the middle of Cloquet's main street.

"It is a runner's dream to be able to run down main street (in this case, Cloquet Avenue) with the huge crowds that were there for the parade," Leno said. "You just don't get that kind of experience very often." 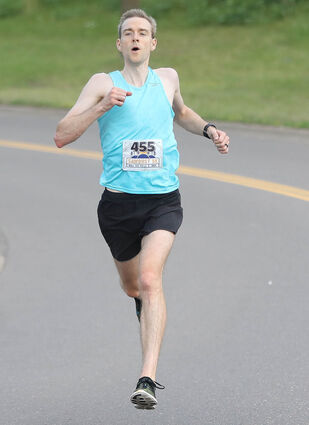 The winner of the 1-mile run was Nick White, but perhaps one of the most touching moments was when LaVonna's daughter, Kristi - who walks the course each year in honor of her mother - was joined by longtime local running star Jarrow Wahman.

"Jarrow is a legend in local running circles and for him to seek out Kristi and walk the entire race with her was just a great moment," Leno said. "It shows how classy he is, and it was a touching tribute to LaVonna in her race."

LaVonna was an avid walker in the area. The race was named after she died as the result of a pedestrian-car accident when she was out walking in 2017.

"To have over 100 runners come out and run in the 1-miler was fantastic," Leno said. "It was just an awesome environment with all the people lined up along the parade route cheering for the runners."