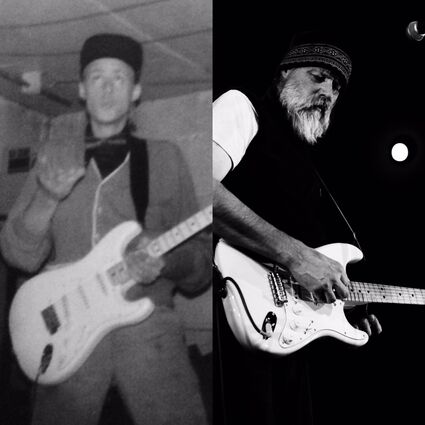 When Jay Shogren still lived here, the Cloquet High School 1976 grad was a pretty good basketball player who enjoyed drinking beer, hunting and playing "electric music" as a teenager. He's shown here practicing in his grandparents' basement in central Cloquet and, more recently, performing as a well known Americana-style musician, which he does in addition to his career as a professor and environmental economist.

It's been a minute, but Jay Shogren will be playing in Cloquet again this Saturday, more than 40 years after his last performance here.

Visiting his hometown between tour dates, Shogren will perform 6:30-8:30 p.m. Saturday, July 17, at the NorthEastern Hotel and Saloon on Cloquet's Dunlap Island. He remembers stopping at the oldest bar in Cloquet "for a pop" when he was a little kid out running errands with his grandfather.

Shogren's name may ring a bell with readers. Columnist Steve Korby wrote about the Nobel Prize-winning environmental economist in the April 30 issue of the Pine Knot News. In that story, he shared how Shogren's career as an environmental economist led to various academic adventures, including serving on the economic advisory committee under President Clinton and a Nobel Prize-winning study on climate change. In his 50s, however, Shogren picked up the guitar again and restarted his musical career, while still teaching at the University of Wyoming.

Performing as JShogren Shanghai'd, Shogren's music has evolved from the "electric" music of his younger years to a more Americana style, heavy on the storytelling. In a review of his 2012 album, "God Bless These Crooked Little Songs," The Irish Times said his "hard acoustic roots music" demonstrated a "reimagining of a whole slew of styles from country to blues, polkas, rockabilly, etc."

Although he lives in Wyoming and talks about his home of Centennial - "population 100, with four bars" - his northern Minnesota roots make frequent appearances, whether it's the story he tells about poor relatives leaving their baby in the back seat of a rich stranger's car before launching into song, or the lyrics themselves.

"Jessica Lange, she was born in my hometown.

I never met her, but my cousin and her brother, they were best friends, used to bartend downtown," Shogren sings on the 2020 album, "Pulp for Paper."

"My Aunt Bert called her 'Jessie,' so I guess before King Kong she must have hung around.

I heard she cried when the Tulip Shoppe burned down.

Other verses of his "Jessica Lange" song mention Frank Lloyd Weber "pumping gas" and his uncle Lloyd, "a one-armed barber."

"I've got a bunch of songs on all the albums related to people that lived in Cloquet, friends, ancestors ... I can incriminate a lot of people," Shogren said with a chuckle during a Tuesday phone interview as he made his way toward Minnesota with performances in Saratoga and Casper, Wyoming, followed by a stop in Deadwood, South Dakota Thursday night.

Economics and music are not exclusive, Shogren explained. It's not like he switches off one side of his brain when changing gears.

"I guess when I wasn't doing so much music, that part of my brain was affecting my science, making sure the ideas were well understood like a good song," he said. "It's not just material because you influence policy and how people think about nature and connections."

And science plays into his music too. The "pragmatic reverse" can also apply to the arts in the editing process and other ways, he said.

"It's not arts or science, it's both," Shogren said.

He harkened back to that last performance at the Golden Gate again, recounting how his buddy Tim Palmer called to tell him he'd won a songwriting contest in Minneapolis. More recently, songwriting led him to contests and performances at the Lincoln Center in New York City and the Kennedy Center in Washington, D.C.

"Being able to craft a song that speaks to people, you get to see a lot of the world," he said.