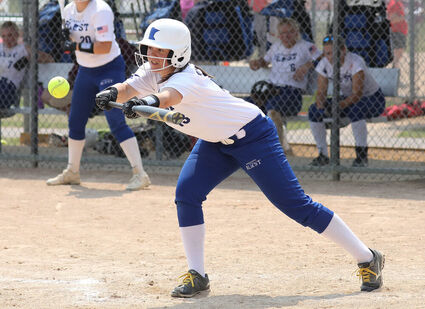 Esko's Mikayli Marciulionis drops a bunt down for the Minnesota Blast 18U team during Sunday's USSSA Northern State tournament at Braun Park in Cloquet.

Braun Park was bustling again this past weekend as 30 girls fast-pitch teams converged on the sparkling complex in Cloquet's Hilltop neighborhood for the USSSA Northern State tournament.

"It was just great to see the park finally full again," said tournament director Jeff Woollett. "Cars were lined outside the parking lot all the way down the roadway. After a year with Covid, it was just fantastic to see all the kids and people at the tournament again."

Through Woollett's efforts, Braun Park has been host to numerous USSSA Northern State tournaments, and following this year's tournament the national organization asked if Woollett would be willing to do it again in 2022.

"I told them I would let them know next year," laughed Woollett. "It's hard to say 'no' when you see all the kids out here playing and having fun."

There were strong numbers in the 14U and high school divisions, but numbers were low in the 10U and 12U groups. At 10U, only four teams participated. The eventual winner was Cloquet Nu Luxe, which downed Superior in the title game. The 12U winner was the Twin Ports Rampage, which defeated the Cloquet Skuteviks Floral team, but there were only three teams in that division.

"If we don't see larger numbers in those younger groups we probably won't host them next season," Woollett said. "Our numbers were solid, though, in the other two age groups."

In the U14 division, the Cloquet-based Minnesota Blast emerged victorious over the other eight squads, beating Grand Rapids in the finals. That team is coached by Angie Jones, Tony Anderson and Mike Morley.

There were 14 teams for players ages 15-18 In the high school division, but they could have called it "the Minnesota Blast show."

"We had Hannah Mitchell coaching third base and making all the decisions, and Lizzie Hey was coaching at first base," said co-coach Brent Pokornowski. "I basically was in the dugout running the book, which allowed me to enforce the 'positive dugout attitude' and the 'positive plate appearance' attitude with the team."

The coveted high school Gold Division was won by the Minnesota Blast 18U squad. The 18U Blast defeated the Lady Storm from Apple Valley 9-0 in the championship game.

"Our 18U Blast team won five straight elimination games on Sunday to win the Gold Division," said Tyler Korby, who coaches both the 18U and 15U teams and serves as Blast club director.

In all, there were 62 girls wearing Blast jerseys on the weekend.

In a twist of fate, the 16U Blue Blast team faced off against the 18U team in a game won 6-4 by the 18U team. The 16U Blue is coached by Steve Martin and Dave Carlblom.

"These girls have been working their tails off this summer. We are practicing several times a week and playing every single weekend," Korby said. "They love to play ball and this past weekend was just another example of that. I couldn't be more proud of their efforts. It was pretty special the way things finished on Sunday. The 14U won the tournament, then the 16U and then the 18U defended their title for the third year in a row."

All in all, the tournament was a huge success for the Braun Park complex and for the city.

"This is what the park was built for," Woollett. "It's about the kids, and that's what keeps me coming back every year. It is hard to say no to the kids, and to give them the chance for such an experience is a great thing."