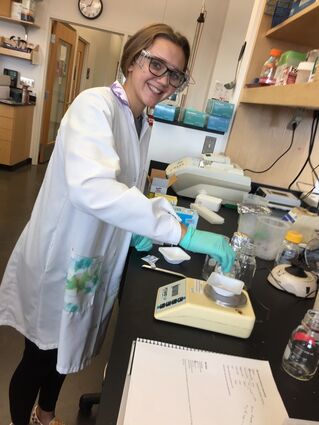 Cloquet senior high science fair students have been at the top of their game during the pandemic, winning their way to national and international competitions. Pictured is Aili Buytaert.

With Cloquet's high school science fair participation decimated by Covid and distance learning over the past year-and-a-half, the handful of older students who stuck with it are seeing dramatic successes.

Cloquet junior Harmony Tracy took first place in the state for her ArcGIS story map and advanced to the national competition; she also won a $40,000 scholarship to the University of Arizona for her research on wild turkeys and the effects of climate change on their range.

Freshman Grace Lavan was hot on her heels, taking second at state for her ArcGIS story map for her research on wolf pups, and fourth place at the international Genius Olympiad, an international fair which focuses on environmental/ecological research.

Sophomores Rowan Rock, Aili Buytaert and Emily Sapyta all competed at Genius Olympiad; Rock and Buytaert were each awarded a bronze medal for third place.

Additionally, Rock represented Minnesota at the national Stockholm Junior Water Prize competition after her research paper on mealworm gut bacteria and its effect on polystyrene was deemed No. 1 in the state. Sapyta was runner-up to Rock for her paper on tannins and oil remediation. According to Welsh, the Stockholm Junior Water Prize is the most prestigious national award for a water-related science project at the high school level. She said the prize "taps into the unlimited potential of today's youth" as they seek to address current and future water challenges.

As previously reported in the Pine Knot News, Tracy, Sapyta and Rock also were chosen to attend the Regeneron International Science and Engineering Fair (ISEF) in May, the "Olympics" of science fair, according to longtime Cloquet science fair director and mentor Cynthia Welsh.

Any other year, all these awards would have involved lots of travel for these young scientists. ISEF rotates among cities, while the Genius Olympiad always takes place in upstate New York. The Cloquet students would have mingled with hundreds of students from all over the country and the world at both events. Thanks to Covid-19, every science fair competition was held virtually this year, with presentations recorded in advance and interviews with judges online.

That doesn't take away from the honor of being deemed worthy of competing at such events, but it does take away some of the fun. It's not quite the same sitting on your couch listening to the awards ceremony versus sitting in an auditorium with hundreds of your peers, even if your mother erupts joyfully in the next room when your name is called.

Welsh said she admires her leading science fair students all the more because they haven't had that big carrot of free travel as a reward.

The joy of learning

"It's crazy to hear how well everyone from Cloquet did, but I would have been fine doing all the stuff with the wolves," said Grace Lavan, "even without any awards." She's always wanted to study wildlife biology or zoology, and said she's grateful that she found a project where she can work with Fond du Lac wildlife biologist Mike Schrage. For this year's project, Lavan looked at whether human interference affected how far grey wolves would move their dens and their pups when relocating. She got to help with collaring the wolf pups - who were awake during the process, and friendly - and visit the wolf dens. Lavan ultimately found there was no significant difference in wolf den pup relocation after a human disturbance or, for example, disturbance by another animal or after the den became tight or too messy.

Like Lavan implied, there are rewards inherent in the research. The joy of learning and helping make the world a better place with the knowledge gained.

With academic and other professionals mentoring them in addition to Welsh, Cloquet students come up with some pretty remarkable research. Buytaert, for example, tested the effects of different artificial sweeteners on gut bacteria. She found that aspartame was the worst, because it made the gut stop metabolizing regular sugar and metabolize only aspartame. Stevia, on the other hand, is metabolized at the same rate as glucose. 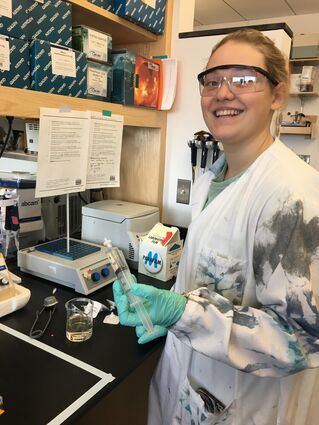 Rock has been advancing her mealworm research each year, searching for the worms' secret to digesting plastic foam to help rid the world of the longterm pollutants. She has her next step figured out, but also plans to pass her project on to a younger student when she graduates, as Claire Taubman did before her. In the meantime, she'll keep testing the bacteria she discovered on different types of plastics.

Sapyta will continue her "green chemistry" project researching the effect of different concentrations of tannic acid found in St. Louis River water and staphylococcus aureus (think staph infections) to help aquatic systems that have been contaminated by motor oil.

And Lavan plans to continue researching wolves. "It's been really fun," Lavan added. "It's hard to believe I can do this through the school. It feels like you're in an internship, it feels so special."

And there's always next year. Tracy is the oldest, with one more year to compete as a senior. "I really hope I make it again next year," Tracy said.