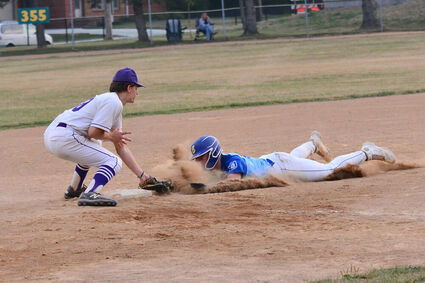 Esko's Noah Furcht dives for third base but is tagged out by Cloquet's Carson Psyck as the Esko and Cloquet Legion baseball teams meet at Cloquet's Mettner Field Monday evening.

Local baseball teams are winding down the regular season and getting ready for district tournament play. On Monday night the Esko and Cloquet Legion teams met at Ed Mettner Field in Cloquet. Both teams face different playoff paths starting next week.

Legion baseball normally serves players 17-19 years old, while VFW baseball is for younger players up to age 16. The younger teams have the option of not playing VFW and instead playing Junior Legion baseball, and that is what Esko is doing as a summer program.

"In 2019 we took second in the state at our level," Balow said. "With how young we are this summer, it just makes sense we only play at the Junior Legion level."

Cloquet is facing much the same situation as Esko with four 2021 graduates on their roster plus five juniors and six sophomores. Playing in Division I is also a tough proposition as Cloquet plays in a district with much larger programs, meaning a larger pool of talent to draw from.

"We have 26 of our high school guys out for summer baseball between Legion and VFW," said Cloquet coach Tyler Olin, who also coaches the Cloquet High School team. "We've averaged a practice and three games a week each week this summer with a week off around the Fourth of July."

On Tuesday, Esko had the upper hand as they won the VFW vs. Junior Legion game 13-7 and then the Senior Legion game 10-1. Many of the same players who played in the first game were on the field for the Senior game as they doubled up innings and got a chance to continue to improve their skills on a beautiful night at the park just off 14th Street.

"We have a young team. [We are] playing a lot of sophomores (juniors-to-be) at the Legion level, when college freshmen are eligible to come back from college and play in the summer," Olin said. "Hopefully we will see it pay off the next year or two in high school ball."

Earlier this week the seedings came out for the district Senior Legion playoffs, with Cloquet picking up the No. 8 seed in the eight-team tournament. Cloquet will travel to Grand Rapids on Thursday to take on the No. 1 seed after this issue of the Pine Knot News went to press. 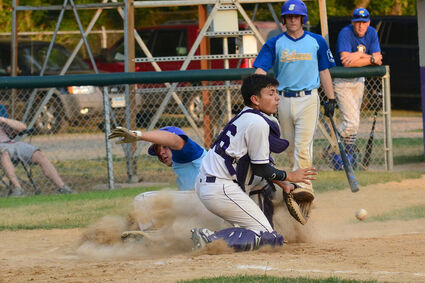 Meanwhile, Esko will play in the Junior Legion district tournament, and those seedings will come out later this week. Esko is hoping they can duplicate their 2019 run in this year's district tournament. There are nine teams in Junior Legion play; in addition to Esko, they include Proctor, International Falls, Taconite, Eveleth, Aurora, Ely, Two Harbors and Cherry.

Although both coaches faced a lack of numbers this summer, both are optimistic.

"Low numbers mean more playing time for the guys who do want to be here," said Olin. "It may mean a little more effort for our coaches making sure we'll have nine to play each day, but the guys that show up are getting better."

Those sentiments are echoed by Balow.

"Kids are pulled in so many directions in the summer that it can be tough," Balow said. "We had our first full practice yesterday and there have been a lot of games where we've only had nine or 10 kids, but the kids who show up are getting a ton of playing time and are getting better every day."

The hopes for both teams are to be playing their best as the playoffs begin and continue their summer of baseball as long as possible.