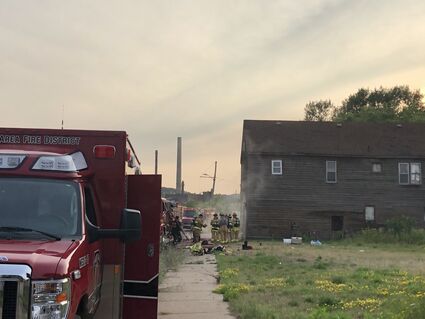 Where there's smoke, there's fire ... unless you happen to be a firefighter in training.

For a couple weeks now, firefighters from the Cloquet Area Fire District have been putting on their gear and driving various fire trucks and emergency vehicles to Dunlap Island to practice on a real building that they will burn in their final practice sometime in August.

It's a two-story wooden building with a long history -- as a bar, a boarding house and more -- but in recent years it's simply been an apartment building on St. Louis Avenue that was aging and no longer worth fixing up. NorthEastern Saloon & Hotel owner Bert Whittington purchased the building earlier this summer, and offered it to the fire district as a learning experience. 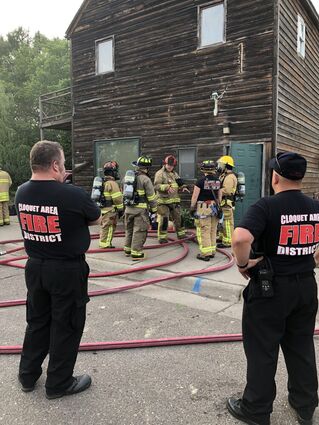 On Monday, July 19, firefighters were practicing various scenarios: the home had a "fire" upstairs and people trapped in a first floor apartment. Different crews took turns practicing each scenario, putting out the fire upstairs in blinding smoke, and searching for victims, again with smoke preventing them from really seeing what they were doing.

"This is helpful because it's about as realistic as we can get. Similar stairwells, similar problems with doors closing, getting up the stairwells going through apartments so it gives us a real world bill," Hutchinson said. "All our training stuff is helpful, but those are places we're in all the time and we know what it's like. This gives us something where we don't know what it's like. It adds another level of realism to what we're doing."