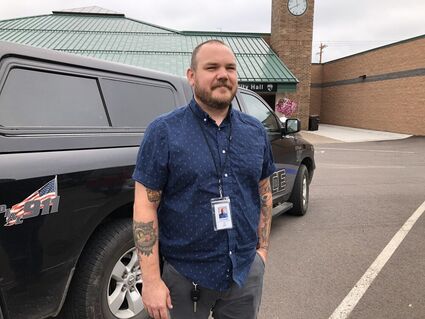 It's not only big-city police departments that are using embedded social workers. Thanks to a state grant, a social worker from the Human Development Center is working with four law enforcement agencies here: the Cloquet, Fond du Lac and Moose Lake police departments, along with the Carlton County Sheriff's Office.

Troy Homstad has been working out of an office at the Cloquet Police Department since April.

Cloquet Sgt. Nate Cook said he loves having Homstad along when he is called to situations where people are in crisis, explaining that law enforcement officers are dispatched to people who are in serious need of services but aren't necessarily committing any crimes. "Beyond focusing on our own training, it sometimes feels like there is nothing we can do to help these people."

Cook stressed that Homstad can bridge the gap between the human at the other end of the 911 call and knowing what resources are available from other institutions, including hospitals, health and human services, the court system, psychiatric facilities and more.

"I think the things that rose to the surface were the 'where do we go from here' and looking for the ongoing support for the community - that's where a lot of the need is," Homstad said, adding that he hopes he will be a "hub" and help complete the circle of various resources.

"One is the in-the-moment, current-call type model where if it meets a certain criteria or officers request it, I can respond with them and provide risk assessments, de-escalation, resource referral type things," Homstad said in an interview Tuesday. "Generally speaking, those end up being check-welfare calls, or calls related to suidice threats, psychological problem calls, substance use, things like that."

The other path is more about long-term case management or follow-up calls.

"Those are working with some of our high-needs individuals in the community, who maybe have mental health or substance use concerns, so I work with them to get them connected to services or getting them some help that will maybe stabilize them and reduce some of those repeat calls to 911 and things like that," he said, adding that officers can also ask people if they'd like to talk to him later, even if he isn't on the call.

"That's kind of a blind spot," he said. "If you're in crisis we are going to do our best to get you to a hospital or to that upfront care, but being in crisis isn't a crime, and there isn't going to be a lot of follow-up on our end. And you may have a caseworker, but we're not always going to be connected to those folks. We can mention to Troy that we dealt with you and ask him to follow up."

While his role is somewhat unique because of the rural nature of Carlton County and the fact that he's working with multiple agencies, the idea of embedded social work programs has been around in larger cities for a while. The Duluth Police Department has operated a mental health unit for several years, which includes two officers and two embedded social workers. The same HDC program - and state grant to fund it - proposed adding a psychiatric nurse to the Duluth unit.

Since he started work in April, the former crisis coordinator and the agencies he serves have been figuring things out as they go along. Although he works with the law enforcement departments, Homstad is not a police officer. He is employed by HDC. He can go anywhere the four departments cover, including calls on the Fond du Lac Reservation in St. Louis County, but don't look for him to be talking down armed suspects if he could be in harm's way.

Homstad is making a difference, Cloquet police chief Derek Randall told the Cloquet City Council last week. "He hit the ground running and made an almost immediate impact," Randall said. "We're lucky to have him."

Homstad said he's been impressed with police skills in de-escalation and working with people with mental health problems. He's been in a number of situations where his more-developed risk assessment skills have meant he noticed that someone needed to go to the hospital when the police might not have. On the flip side, there was a situation where he was working with someone and the officers pulled him back because they saw the situation escalating.

It's a growing partnership, Homstad said. The grant program runs for two years. He said he loves coming to work. "No one day is the same," he said.

Cook is glad he's there too, and optimistic about the future.

"I love having Troy with me when I am called to someone in crisis," Cook said. "In working together to actually help people suffering from mental illness, we are also able to brainstorm ideas and identify other shortcomings of the 'system.' I believe these shortcomings will only improve when we work together beyond our own professions to fill in the holes that currently exist. I am excited to see where this program goes."